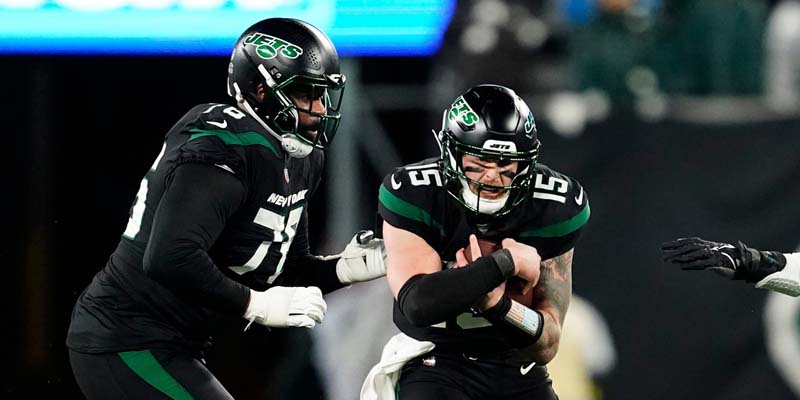 The New York Jets will go against the Seattle Seahawks in NFL action in Lumen Field, WA, on Sunday, January 1, 2023, at 4:05 PM ET. Zach Wilson might now be added to the list of quarterback failures for the New York Jets, which is already getting longer. Wilson had a terrible performance in his most recent start, a 19-3 loss against Jacksonville on December 22. The former No. 2 choice in the draft completed 9 of 18 passes for 92 yards and a rating of 41.9. He was so terrible that Chris Streveler, the fourth quarterback on the team, was put in his place. Streveler ran for a team-best 54 yards and completed 10 of 15 passes for 90 yards. Wilson was inactive by the Jets following the disaster, so they don’t even want him as a backup in case Sunday’s starter, Mike White, gets hurt. In New York, the time of Zach Wilson could be coming to an end.

The Jets’ track record with quarterback draft choices is dismal. Geno Smith, the opponent they will face on Sunday, was a failure in New York, but now look at him—he’s a pro Bowler in Seattle. Sam Darnold was another; he is now the starting quarterback for the Carolina Panthers, who are currently playing well and have a chance of making the playoffs. Wilson could yet have a second act, but it won’t likely be with the Jets. Mike White, who will start against the Seahawks on Sunday after missing a couple of weeks with a rib ailment, is the man of the moment in New York. The Jets’ offense is rated 25th in the NFL, but their defense is ranked 4th.

Geno Smith, who managed to elude capture in New York, later played for Seattle and had a Pro Bowl season. It took some time, but Zach Wilson may still have hope. anyway for now. The Seahawks, who have dropped three consecutive games to drop to 7-8, will be totally focused on winning at home. They were previously considered a lock for a wildcard slot, but now they are on the outside. They are all three barely behind 7-7-1 Washington, and they are tied with Detroit and Green Bay. With matches against the Jets and Rams remaining, both at home, the Seahawks can put themselves in a good position to secure a postseason place.

They recently had a difficult time, suffering back-to-back defeats to the Chiefs and the 49ers, perhaps the two finest NFL teams. On Saturday at Arrowhead, the Chiefs defeated them by a score of 24-10. Seattle gained more yards and had more first downs than the Chiefs, but they were unable to score when it mattered most. The Seahawks only generated late on a garbage-time touchdown as Kansas City dominated the game the entire way. Smith was 25 for 40 for 215 yards, one touchdown, and one interception. DK Metcalf grabbed 7 receptions for 81 yards, while Kenneth Walker gained 107 yards on the ground. The Seahawks are 29th in the league for points allowed per game and ninth in terms of points scored per game.

New York Jets vs Seattle Seahawks. The NFL pick for this game is the Seattle Seahawks. Although the Hawks dropped their last three games, they did so against two of the top NFL clubs. The rowdy home crowd, one of the loudest in the NFL, who can scent a playoff berth, is only one of the intangibles in this game. Then there is Geno Smith, who has a chance to disprove the Jets, who wrote him off. You don’t believe he desires this? Then there is Pete Carroll, the former Jets coach, who is in charge of a squad that everyone anticipated would be awful. He has a chance to beat his previous squad as his team is in the playoffs. Seattle will win by a predicted score of 24-21.