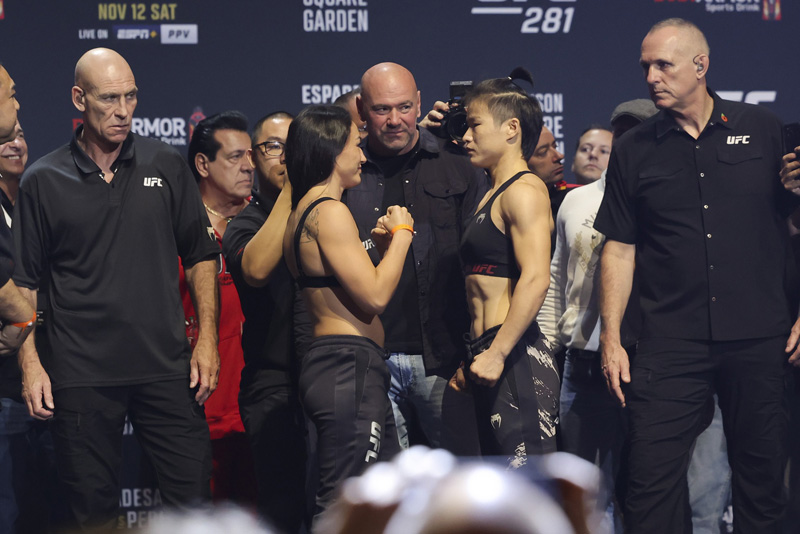 Carla “ Cookie Monster “ Esparza and Weili “ The Magnum “ Zhang will battle it out Saturday in UFC 281 at the Madison Square Garden in New York on. Esparza enters this fight with a 19-6 record and 58 percent of her fights won by decision. Zhang entered this fight at 22-3 and won 50 percent of her fights by knockout. Carla Esparza is coming in standing at 5’1” and 115 pounds. Esparza has a 63-inch reach and a 20-6-0 record.

American professional mixed martial artist Esparza competes in the Strawweight division of the Ultimate Fighting Championship. She is the current and two-time UFC Women’s Strawweight Champion. Esparza has an orthodox fighting stance, a style that of a wrestler. In the last 5 bouts, Carla has posted a 5-0 record, but it will not help much in this fight here against the Chinese fighter across the ring.

Zhang Weili is entering the fight standing at 5’4” and 116 pounds. Zhang has a record of 63 inches and a record of 22-3-0. Zhang Weili is a mixed martial artist hailing from China. She is the former Kunlun Fight strawweight champion and competes in the strawweight division of the Ultimate Fighting Championship. She is a former UFC Women’s Strawweight Champion and the first-ever Chinese champion in UFC history.

Zhang won 11 of her last 13 fights, and she’s coming off a June win over Joanna Jedrzejczyk. The Chinese fighter is averaging 5.78 significant strikes per minute, with an accuracy percentage of 47 percent. She is averaging 2.09 takedowns with an accuracy percentage of 34 percent. Zhang is coming off a knockout win at UFC 275 where she landed 94 total strikes and produced 3 takedowns. The bout earned performance of the night honors, and Zhang has now produced 11 career knockouts. She has a complete fighting style with backgrounds in kickboxing and is a purple belt in BJJ. Zhang’s constant pressure and aggressive approach in her stand-up is where she unleashes combinations and a relentless gas tank. Zhang has a killer instinct that you don’t see all the time on the woman’s side, and 18 of her 22 victories have been finished. This will be Zhang’s second career fight in New York.

Zhang Weili vs Carla Esparza. The UFC pick for this fight is Zhang Weili. This matchup will take UFC fans a mile farther between both. In this fight here it will be a good back-and-forth battle. However, the key thing that will determine the winner in the fight is the number of strikes per minute that land. That will tip the fight towards Zhang who is throwing 5.78 strikes per minute versus the 2.20 per minute from Carla. UFC 281 Winner Prediction, Zhang Weili.