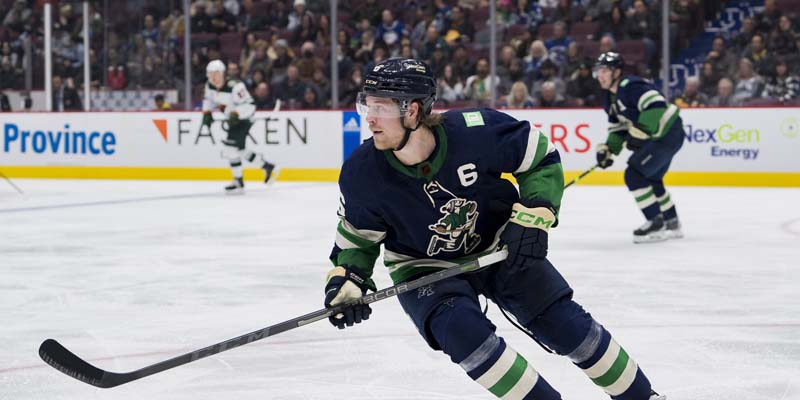 The Calgary Flames will host the Vancouver Canucks at the Scotiabank Saddledome in downtown Calgary, Canada. The Flames are still in the playoff race by a hair as they currently hold an overall record of 13-11-5 for a total of 31 points. The Flames are coming off a 2-1 shootout loss to the Montreal Canadiens, Monday and will look to bounce back in this matchup against the Canucks.

Despite Vancouver’s offense stepping up and scoring 3.46 goals per game with 16 goals in the last four games, the Canucks are still struggling. Elias Pettersson, J.T. Miller, and Bo Horvat scored 44 goals and 45 assists to lead the top two lines. Andrei Kuzmenko, Ilya Mikheyev, and Brock Boeser totaled 26 goals and 31 assists. Defensemen Quinn Hughes and Oliver Ekman-Larsson added a goal and 38 assists from the point to open up the offense.

Meanwhile, the Calgary Flames lost their last three matches with their offense collapsing, scoring only 2.97 goals per game with only six goals in the last three outings. Nazem Kadri, Elias Lindholm, and Tyler Toffoli scored 30 goals and 35 assists to lead the top two lines but the rest of the offense struggled. Andrew Mangiapane and Blake Coleman should step up as they play a pivotal role in the forward unit but have only pitched 11 goals and 14 assists on the season.

The Calgary Flames average 3 goals per game and are scoring on 20.2% of their power play opportunities. Nazem Kadri leads Calgary with 11 goals, Rasmus Andersson has 16 assists, and Tyler Toffoli has 91 shots on goal. The Calgary Flames’ defense allows 3 goals per game and is killing 81.4% of their opponent’s power plays. Jacob Markstrom allowed 52 goals on 505 shots faced, and Dan Vladar gave up 30 goals on 317 shots.