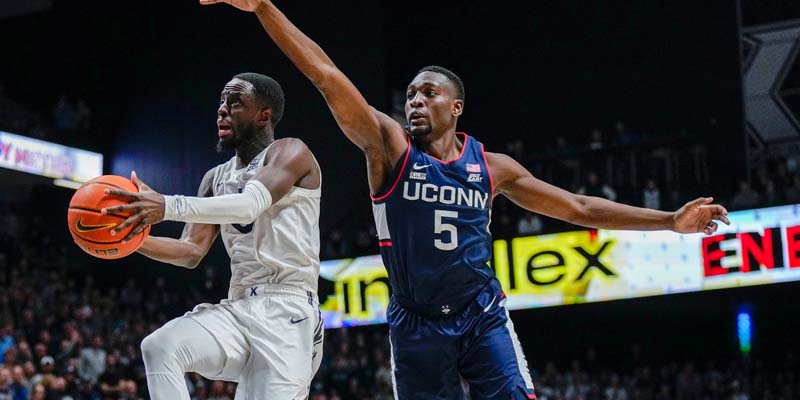 The UConn Huskies will go against the Providence Friars in NCAAB action in Amica Mutual Pavilion, RI, on Wednesday, January 4, 2023, at 8:30 PM ET. In their most recent encounter, the Musketeers ended the Huskies’ 14-game winning run. They will strive to recover from the defeat by defeating the Friars, which would be their 15th victory in their previous 16 games. UConn scores 82.3 points per game on average. In their most recent match, they scored 73 points while hitting 41.8 percent of their field goals and 35.1 percent of their three-point attempts.

The Huskies were led by Adama Sanogo, who had 18 points and 6 rebounds. Jordan Hawkins contributed 11 points and five rebounds, and Andre Jackson Jr. ended with 14 points, 10 rebounds, and 8 assists. UConn’s defense was strong, allowing just 60.7 points per game. If they wish to win this game after giving up 83 points in their previous contest, they will need to perform better. For this game, Samson Johnson (Foot) is questionable.

The Friars are currently performing well with a seven-game unbeaten run entering this contest. They will attempt to maintain their winning streak by defeating the Huskies, which would be their eighth straight victory. Providence scores 80.2 points per contest on average. In their most recent game, they scored 74 points while making 50% of their three-point attempts and 48% of their field goals. The Friars were led by Devin Carter’s 22 points, four rebounds, and five steals.

Bryce Hopkins contributed 12 points and eight rebounds, and Jared Bynum finished with 18 points and four rebounds. Providence performed admirably on defense, allowing only 67.7 points per game. They conceded 59 points in their previous game, so they will need a similar performance to win.

UConn Huskies vs Providence Friars. The NCAAB pick for this game is the Providence Friars. The Friars triumphed in eight straight at home and seven straight overall. They excel offensively, particularly at home where they average over 87 points a contest while hitting over 50% of their shots. They did an excellent job of regaining possession of the ball, and they are very active on the offensive glass, collecting more than 12 offensive rebounds per game, which will increase their opportunities to score. They also did a decent job of guarding the ball at home and won’t provide many easy-scoring opportunities for the Huskies. The Huskies were strong on defense, but they struggled recently, allowing more than 73 points per game in their last three contests. They will find it difficult to slow down the hot-shooting Friars. The Huskies also performed admirably, sweeping 14 of their first 15 games and suffering just one road defeat. While they were effective offensively thus far, scoring 75 points per game on the road, they were not as effective. Anticipate them to have a few extra scoring opportunities against the Friars since their rebounding declined recently. Choose Providence to cover the spread because they restrict opponents to under 68 points per game at home and will restrain UConn’s offense. The Providence Friars will win to a predicted score of 74-68.