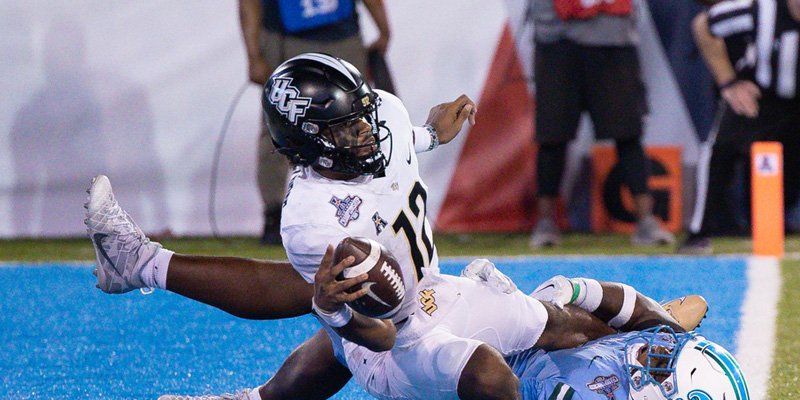 The Duke Blue Devils and UCF Knights gear up for collision on Wednesday in the college football Military Bowl from Navy-Marine Corps Memorial Stadium in Annapolis, MAryland on Wednesday evening at 2:00 PM (EDT). The Knights come into bowl season with nine wins of 13 games after the Tulane Green Wave clobbered them with a 17 point loss against in the AAC Championship. The UCF defense had its worst of the season as Tulane racked 648 total yards including 394 through the year to score 45 points on a 21 point fourth quarter. The UCF offense moved the ball well covering more than 400 yards to score 28 points. The team scored in the first quarter and converted only six third downs resulting in the loss.

The Duke Blue Devils come into their last game of the year with eight wins on the season after a 3-point victory over the Wake Forest Demon Deacons. Duke’s offrnse did just enough eclipsing 500 yards with nearly 400 through the air to score 34 points after a 20 point first half to get the win. Duke’s defenses struggled as Wake Forest scored 31 points on 453 yards, but the Blue Devils forced a turnover to secure the victory.

The Blue Devils will enter at 8-4 representing the ACC in Mike Elko’s first year as head coach. Riley Leonard threw 2,794 yards, 20 touchdowns, and 6 picks on 63.6% passing while also rushing for a team-high 636 yards and 11 TDs. Jordan Waters has 561 rushing yards with 8 touchdowns while Jaylen Coleman has 465 rushing yards with 4 scores. Jaquez Moore has 427 rushing yards and 4 TDs. Jalon Calhoun has 56 grabs for 811 receiving yards and 4 TDs. Jordan Moore has 643 receiving yards coming on a team-high 57 catches with 5 TDs.

UCF Knights vs Duke Blue Devils. The NCAAF pick is the UCF Knights. Both teams played well this season, but UCF is the better team in this contest, and it will show in this Bowl game. UCF will use their explosive offense to overwhelm a good Duke team for the win. Take UCF to do enough to close their 2022 season with a win and cover in the Military Bowl. Final Score Prediction, UCF Knights win and cover 37-28.