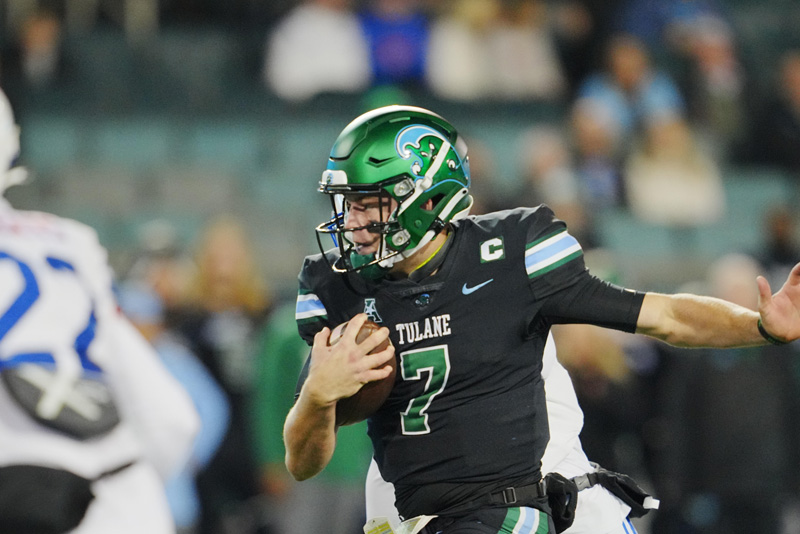 The #21 Tulane Green Wave will be at Nippert Stadium in Cincinnati, OH to battle the Bearcats in NCAAF on Friday at 12:00 PM ET. The Green Wave (9-2) would tie the Bearcats for first place if they win here. Tulane relies on a strong defense that allows the 18th most points in the country at 19.5 ppg. Tulane won over the SMU Mustangs at home on Thursday 59-24. They did this by forcing five turnovers.

After making it to the College Football Playoff last season, fans looked to see a decline of the Cincinnati Bearcats in this season. Head coach Luke Fickell’s club is one win away from making it to the conference final with just 19.7 points allowed per game. Cincinnati beat Temple 23-3 on the road on Saturday limiting their total offense to just 202 yards and forcing four errors.

WR Tre Tucker’s 42-yard touchdown grab from Ben Bryant gave Cincinnati the lead on the scoreboard. The Bearcats added a 14-yard touchdown run from Ryan Montgomery to their 388 total offensive yards and over 37 minutes of possession.

#21 Tulane Green Wave vs #25 Cincinnati Bearcats. The NCAAF pick for this game is the #21 Tulane Green Wave. Cincinnati won four straight games against Tulane, including a 31-12 away triumph last year. The under is worth looking at because they are the top two defenses in the conference. The Green Wave will triumph on the road because their offense is more evenly matched. The Wave is performing admirably this season and just defeated the SMU Mustangs. In that game, Tulane averaged 8.1 yards per play for 451 yards, including 310 rushing yards. Although the passing game was not that impressive, the Wave was a chilly 0-of-7 on third downs. In Cincinnati’s previous game against Temple, their defensive play was flawless. However, the offense’s second half was largely uneventful. The Bearcats won’t be able to cover against Tulane since it will be a more difficult opponent. The Green Wave will win to a predicted score of 24-20.