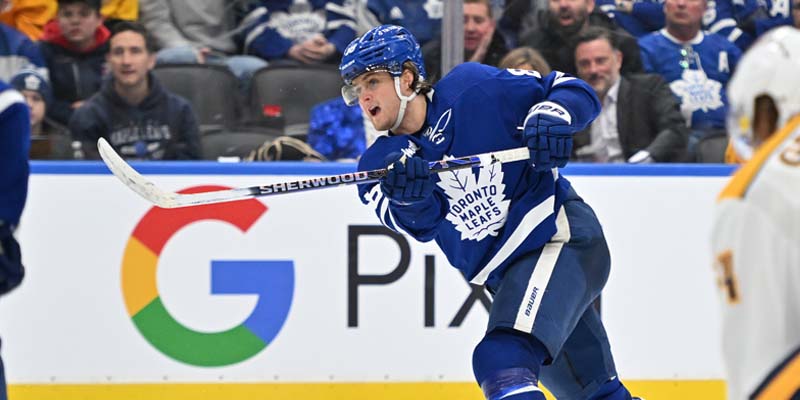 The Toronto Maple Leafs and the Detroit Red Wings will go head to head in an exciting NHL match-up at Little Caesars Arena in Detroit, Michigan on Thursday, January 12. The Maple Leafs, fresh off a successful 2-1 home defense against the Nashville Predators, will be looking to secure their fourth straight win after winning three games in a row. With 57 points scored on the season, the Maple Leafs have improved to third place in the entire NHL standing. Center John Tavares scored one goal and had one assist while RW Mitchell Marner added one goal, leading Toronto to victory. Goalie Matt Murray defended 32 shots with a save percentage of .970 in the win.

Right-Wingman Mitchell Marner is the key player for the Maple Leafs this season; he has been a workhorse for Toronto with a team-leading 15 goals, 32 assists, and 49 points in only 41 games this season. Marner will be leading the way for the Toronto Maple Leafs with an overall record of 25-9-7 on the way to their postseason tour this year. Mitch Marner has 50 points with a team-high 34 assists as well on the year. Ilya Samsonov’s 12-3-1 with a 2.29 GAA and a .916 save percentage while Matt Murray is 11-4-2 with a 2.48 GAA and a .919 save percentage in goal for Toronto so far this season.

Meanwhile, The Detroit Red Wings, fueled by the energy of their home ice, will be fiercely competing to secure their second straight win by taking down the visiting Toronto Maple Leafs on Thursday evening. The Red Wings took advantage of playing at home and shut down the Winnipeg Jets with a final score of 7-5, ending a three-game skid on Tuesday night. Determined to win more games, the Red Wings will fight to keep their playoff hopes alive by gaining a wildcard seat at the end of the regular season. Left-wingman Lucas Raymond put on a strong performance with one goal and one assist while Center Oskar Sundqvist added one goal and one assist in leading Detroit. Defenseman Moritz Seider stood out as the top setter with 4 assists for the Red Wings, showing a fierce and relentless attitude.

Toronto Maple Leafs vs. Detroit Red Wings. The NHL Pick for this contest is Toronto -163. Both squads are sizzling hot as the Maple Leafs will be playing part two of a back-to-back match while Detroit is coming from a big win over a strong Winnipeg Jets team last Tuesday. Toronto is on its way to postseason competition and will not allow Detroit to hinder its way in the quest. The prediction: Toronto Maple Leafs will win 3-2.