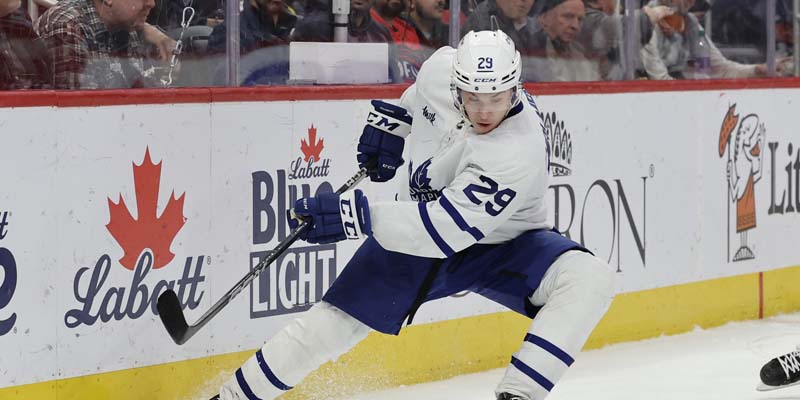 The Toronto Maple Leafs will be in Boston looking to bounce back from their recent road loss by facing off against the host team, the Boston Bruins, on Saturday. Currently sitting in second place in the Atlantic Division with a record of 26-10-7, the Maple Leafs have won six of their last ten games and have an 11-7-3 road record this season. They recently lost a road match to the Detroit Red Wings with a score of 1-4 on Thursday evening. Defenseman Rasmus Sandin was one of the standout players for the Maple Leafs in this game, scoring one goal. Mitch Marner leads Toronto’s offense with 16 goals and is also the team’s top setter with 34 assists this year.

Excited to be starting his 18th game as the Toronto Maple Leafs’ goalkeeper, Matt Murray takes the ice with a confident 11-4-2 record, including one shutout performance this season. Despite giving away 42 goals, Murray maintains a solid 2.48 goals against average and the thrill of winning back-to-back games this season. The Leafs’ defense, standing strong with an impressive average of 2.6 goals per game, ranks 3rd in the entire National Hockey League.

The Boston Bruins will be looking to bounce back after a loss by hosting the Toronto Maple Leafs at TD Garden in Boston on Saturday afternoon. With a record of 32-5-4, they currently lead the Atlantic Division after winning seven of their last ten contests and have a strong 19-1-3 home record. The Bruins are one of the top scoring teams in the league, averaging 3.76 goals per game. David Pastrnak has been a key player for the Bruins with 32 goals, 26 assists, and 58 points scored on 208 shots on goal for the season.

Linus Ullmark will be in goal for the Boston team with a record of 22-2-1 and two shutout starts on the season. He has a career goals-against average of 1.88, having given up a total of 49 goals. In his last start for the season, Ullmark allowed 2 goals and had 28 shots attempted against him.

Toronto Maple Leafs vs. Boston Bruins. The experts are predicting a victory for the Boston Bruins in this match, with a pick of -160. Fueled by a fierce determination to redeem their last loss to the Maple Leafs, the Bruins, who have only suffered one regulation loss at home this season, are eager to take their revenge on their home ice with the support of their passionate fans and a 19-1-3 record. Though Toronto has had a decent run with 6 wins in their last 10 games, the Bruins have been even stronger, with 7 wins in their last 10 contests. The prediction: A 2-1 win for Boston.