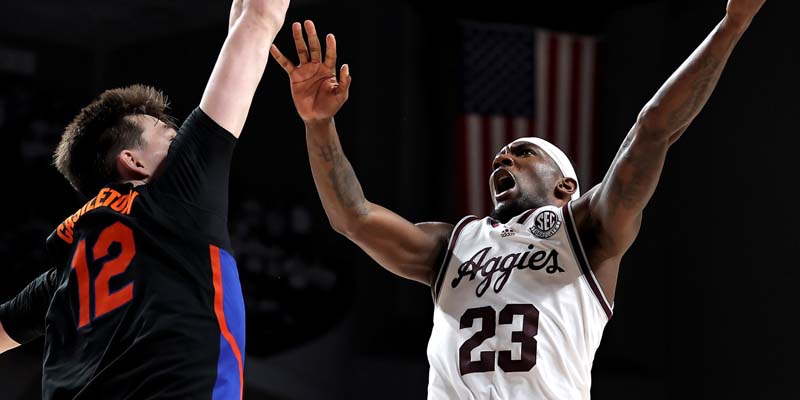 The Texas A&M Aggies will go against the Kentucky Wildcats in NCAAB action in Rupp Arena at Central Bank Center, KY, on Saturday, January 21, 2023, at 2:00 PM ET. The SEC preseason poll only predicted the Texas A&M Aggies to finish sixth, but they performed significantly better so far. In their 5-0 conference start, the Aggies are 4-1 ATS after defeating Florida twice, LSU, Missouri, and South Carolina. There is still much work to be done as Texas A&M is only ranked No. 7 among SEC teams and No. 47 overall according to KenPom. The Aggies only played one rated opponent this season, which they defeated on January 11 by a score of 82-64 against No. 20 Missouri.

Texas A&M ranks 76th in terms of defense and 39th in terms of adjusted offensive efficiency. Wade Taylor IV, a 6′ sophomore who averages 15.2 points per game while shooting 36.7% from the three-point range and 82% from the free-throw line, is in the lead. Taylor did have difficulties in Florida’s close 54-52 victory at home on Wednesday. Despite having eight points overall, the team’s captain only went 2 for 15 from the field. Dexter Dennis, a 6’5″ senior, came through with an impressive 11 points and 16 rebounds in the win over the Gators.

Despite having a shaky start, Kentucky was the preseason media favorite to win the SEC. According to the KenPom rankings, the Wildcats are 33rd in the nation. Despite a 1-3 start in league play, the Wildcats defeated Georgia 85-71 on Tuesday and No. 5 Tennessee 63-56 on the road last Saturday. Oscar Tshiebwe, a 6’9 senior, led the Wildcats to victory over Georgia with 37 points and 24 rebounds.

Tshiebwe is leading the nation with 13.8 rebounds per game this season while scoring 17.3 points per game. According to KenPom, Kentucky ranks 71st on the defensive end and 23rd in the nation for adjusted offensive efficiency. In SEC contests, they are just 2-4 ATS. Following Tshiebwe, 6 ‘5” senior Antonio Reeves is second in scoring with a 12.1 ppg average, and 6 ‘4” rookie Cason Wallace is third with 11.3 ppg.

Texas A&M Aggies vs Kentucky Wildcats. The NCAAB pick for this game is the Texas A&M Aggies. Anticipate the Aggies will keep this game close enough to call to lay the five points. The stretch will be aided by the Aggies’ 74% to 68.2% lead at the free-throw line. Texas A&M will be competitive in that category as they are 16th (54.6%), but one of Kentucky’s main strengths is on the glass, where they are sixth in the country in total rebounding percentage (55.9%). Texas A&M is currently on a 5-0 run against the spread in away games, but Kentucky is just 1-7-1 ATS in their last nine home matches. This game is significant for both teams. I’ll go with Texas A&M to defend. The Texas A&M Aggies will win to a predicted score of 72-65.