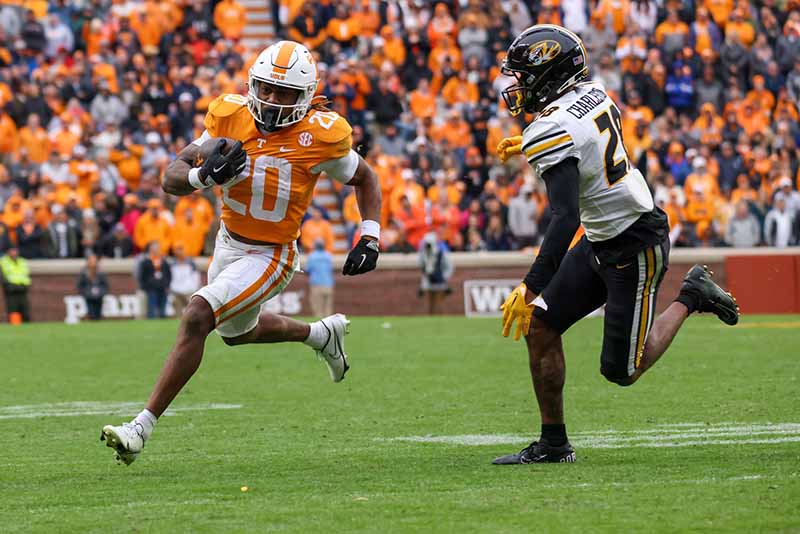 The #5 Tennessee Volunteers will face off with the South Carolina Gamecocks at Williams-Brice Stadium, SC, on Saturday at 7:00 PM ET. After suffering their first loss of the year, Tennessee defeated Missouri handily at home in their prior game. The Volunteers improved to 9-1 overall and 5-1 in the SEC; Tennessee is looking for another significant win here in an effort to remain in the running for the CFP. Tennessee and Missouri were tied at seven after the first quarter, up 28-17 at the half, and ahead 28-24 with little under nine minutes left in the third. A rout was established when the Volunteers scored after two plays, starting a string of 38 consecutive points.

Tennessee has a strong passing attack this year, ranking second with an average of 348.2 yards per game. The team ranks 28th in the nation with an average of 195.5 running yards per game. The Volunteers averaged 47.4 points per game this season, placing them first among the 131 FBS teams that took the field. Tennessee ranks 38th in scoring defense after allowing 21.9 points per game on average.

Last week, Florida dominated South Carolina down the road, handing them their second loss in 3 games. After that loss, the Gamecocks’ record fell to 6-4 overall and 3-4 in the SEC on the season. South Carolina struggled to contain Florida’s rushing attack and trailed 21-0 at the end of the first quarter. The Gamecocks received a bagel in the second half of the game after being down 24-6 at the half. They were never able to claw their way back into the game.

South Carolina averaged 28.6 points per game this year, ranking 67th in the FBS in scoring offense. South Carolina is tied for 98th in the country in running offense, with 127.2 yards per game, and is ranked 70th in passing offense with 228 yards per game. The Gamecocks allow 26.2 points per game, which ranks them 69th in scoring defense. Spencer Rattler completed 180 of 277 passes for 1,982 yards, 8 touchdowns, and 9 interceptions. He also rushed for 8 yards and two scores. Luke Doty completed 10 of 14 passes for 146 yards, 2 touchdowns, and two interceptions. He also gained 63 yards on the run and scored.

Tennessee Volunteers vs South Carolina Gamecocks. The NCAAF pick for this game is the #5 Tennessee Volunteers. South Carolina just struggled miserably against Florida in suppressing the run game, and now they must contend with one of, if not the nation’s most potent attacks. As Hooker is more than capable of causing damage with his legs, the Volunteers may light you up from the air or while you’re on the ground. Tennessee scored at least 34 points in each of their games this year, and as a result, they are now the nation’s top-scoring offense. Since moving to South Carolina, Rattler did not exactly lit the world on fire, and they lack the tools to compete with Tennessee. A subpar defense cannot hold back the Volunteers because they have just too many weapons. Pick Tennessee as they cruise to victory in this match. The #5 Tennessee Volunteers will win to a predicted score of 49-17