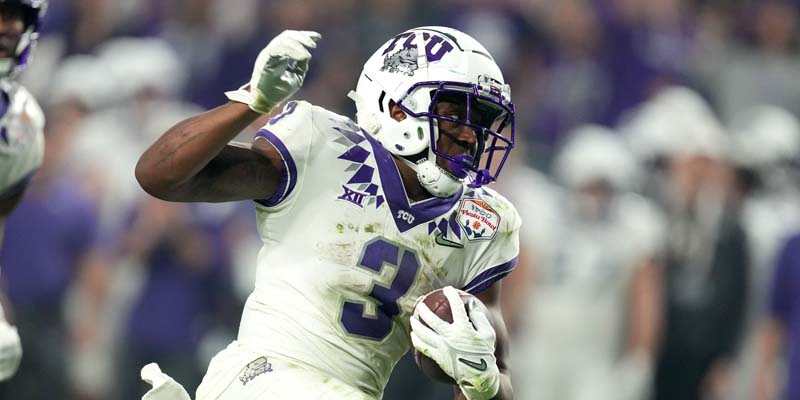 SoFi Stadium will host the CFP National Championship pres. by AT&T between the TCU Horned Frogs and the No.1 Georgia Bulldogs on Monday, January 9, 2023, at 7:30 PM (EDT). The Horned Frogs are in first place in the Big 12 conference with an overall record of 13-1. The team recently won over the Michigan Wolverines by 51-45. Max Duggan completed 14 of 29 passes with 225 yards, two touchdowns, and two interceptions. Emari Demercado led the rushing team with 150 yards and a touchdown on 17 carries while Quentin Johnston led the receiving team with 163 yards and a touchdown on six receptions.

The team has a total of 269.6 passing yards with 204.5 rushing yards. The team has an average of 41.2 points while allowing 25.0 points. Quarterback Max Dunggan has a total of 3,546 passing yards while running back Kendre Miller rushed for 1,399 total yards. Wide receiver Quentin Johnston led the receiving team with 1,066 yards. Linebacker Johnny Hodges led the team’s defense with 81 tackles while safety Bud Clark intercepted five passes for the team.

Over on the Georgia side, the No.1 Georgia Bulldogs are in first place in the SEC East standings with an overall record of 14-0. The team is coming off with a 42-41 victory over the Ohio State Buckeyes. Stetson Bennett completed 23 of 34 passes with 398 yards, three touchdowns. and an interception. Kenny McIntosh rushed for 70 yards on five carries while Arian Smith led the receivers with 129 yards and a touchdown on three receptions.

The Bulldogs passed a total of 293.0 yards and rushed for 201.9 yards. The team has an average of 38.9 points while allowing 12.8 points. Quarterback Stetson Bennett has a total of 3,823 passing yards while running back Kenny McIntosh rushed for 779 yards. Tight end Brock Bowers led the team’s receivers with 790 yards. Linebacker Small Mondon Jr. led the team’s defensive unit with 71 tackles while defensive back Christopher Smith delivered three interceptions.