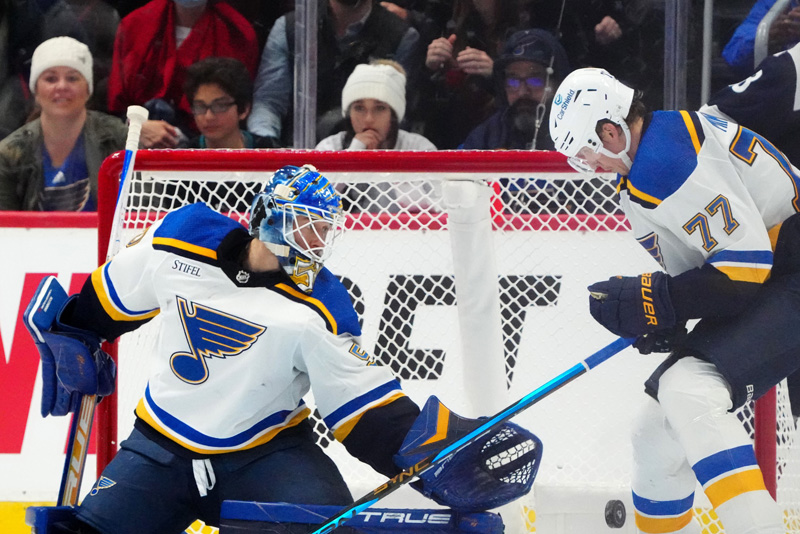 The St. Louis Blues will continue their road trip at United Center in Chicago to face off with the Chicago Blackhawks in Wednesday’s episode of NHL action on the ice. The Blues will try to extend their winning streak to four in coming to this match-up versus the Blackhawks on Wednesday night. St. Louis is 6-8-0 on 12 points and seated at the bottom place in the Central Division with a 4-4-0 road record this year. The Blues played good hockey just recently winning three games in a row including their recent 3-2 road triumph over the Colorado Avalanche on November 14. St. Louis grabbed the lead at 2-1 after two periods on the way to their 3-2 win. Center Jordan Kyrou nailed a power-play goal on an assist from Center Robert Thomas and LW Pavel Buchnevich in the win.

Center Brayden Schenn led the way for the Blues with a team-high 12 points and nine assists including three power-play assists but earned a -8 +/- mark on the season. St. Louis’ Center Jordan Kyrou powered the offense of his team with a team-leading five goals with three coming from a power play on 47 shots on goal for the year.

The Chicago Blackhawks will be staying on home ice and will try to bounce back from their recent shutout loss on Wednesday night. The Blackhawks managed to snap a two-game losing streak with a 3-2 victory over the Anaheim Ducks but failed to continue a streak with a 0-3 shutout home loss to the Carolina Hurricanes. Chicago is 6-6-3 on 15 points and took 5th place in the Central Division with a 4-3-1 home record and an -8 goal difference this year. At the net, Petr Mrazek faced 32 shot attempts and saved 29 but allowed three goals with a save percentage of .906 in the loss.

RW Patrick Kane led the Blackhawks with 12 points while adding two goals and ten assists including seven on the power play this season. Center Jonathan Toews led Chicago in scoring seven goals and three of which came from a power play on 34 shots on goal over the season.

St. Louis Blues vs. Chicago Blackhawks. The NHL Pick for this contest is St, Louis Blues. The Blues continue playing good hockey after ending an eight-game losing slump. St. Louis gained momentum after winning three consecutive games. The Blues will dominate this road contest with a 4-4 record while Chicago is 4-3-1 at home with three losses in its last five. Prediction: The St. Louis Blues will win 3-2.