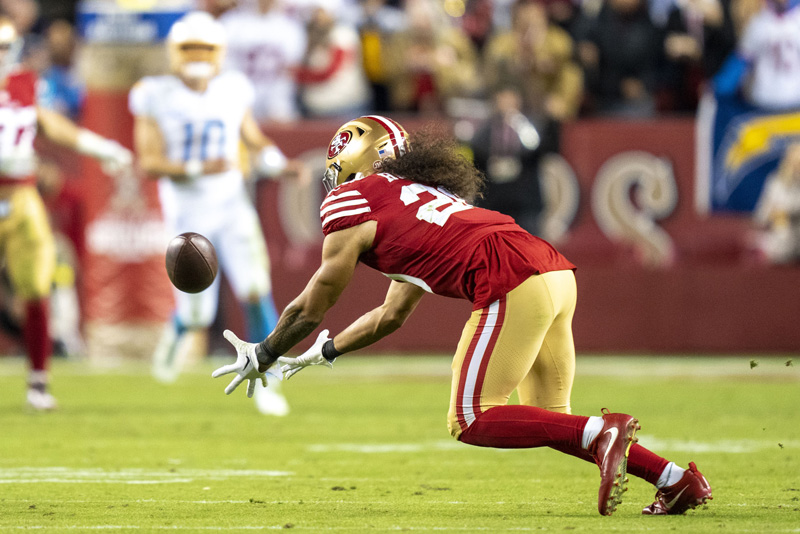 The San Francisco 49ers will be across the border to battle the Arizona Cardinals at Estadio Azteca in Mexico City, Mexico on Monday at 8:15 PM ET. The strong San Francisco 49ers recently defeated the LA football clubs in back-to-back games; they are poised to win the NFC West Division title. Brandon Aiyuk (567 receiving yards and four touchdowns), Deebo Samuel (576 all-purpose yards and three touchdowns), George Kittle (340 receiving yards and two touchdowns), Elijah Mitchell (18 carries for 89 yards against LAC), and Christian McCaffrey are a few of the star playmakers in San Francisco’s legit offense (288 all-purpose yards and 3 TDs with SF).

The Niners are rated first, second, seventh, and fourth in terms of total yards permitted, running yards expected to be able, passing yards allowed, and points allowed per game,  respectively this season. In addition to that, the defense, headed by Nick Bosa, recorded 29 sacks (9 sacks and 11 tackles for loss). Additionally, San Francisco has the eighth-most takeaways in the NFL with 26.

Kyler Murray and Colt McCoy, Arizona’s starting quarterbacks for Monday Night Football, are both doubtful. Last week against the Rams, McCoy began in Murray’s place but left the game due to a knee injury. Arizona needs them to handle the game carefully regardless of who starts at quarterback – former Penn State QB Trace McSorley is next in line – especially against a lockdown San Francisco defense.

The Arizona Cardinals’ defense was not very effective this season. It allowed 357.6 total yards and 25.8 total points per game, which ranks 30th in the NFL. Due to its opponents scoring touchdowns on 67.5 percent of their trips into the red zone, Arizona ranks 28th in red zone defense and has the 8th-fewest sack total in the league with 19. The Cardinals are top ten in terms of running yards allowed (110.5 per game), but they rank 23rd in terms of pass defense (247.1 yards allowed per game).

San Francisco 49ers vs Arizona Cardinals. The NFL pick for this game is the Arizona Cardinals. The 49ers are 5-0 ATS in their past five games against the NFC West and have the matchup advantage in the majority of statistical categories. San Francisco’s quarterback is also healthy, guaranteeing that it will make the most of its talented bunch of receivers. San Francisco would win outright if I were to make a prediction. It’s more complicated when there is an eight-point spread, though. In their previous nine encounters with the Cardinals, the Niners are 1-7-1 ATS, and they recently struggled against Atlanta and Kansas City. While losing to Kansas City is one thing, the Falcons’ 14-point setback to ATL is becoming worse every week since they are 1-3 since that triumph. Murray or McCoy must participate in the game and not be too limited to have an impact if the score is to remain close. The Cardinals will win to a predicted score of 28-20