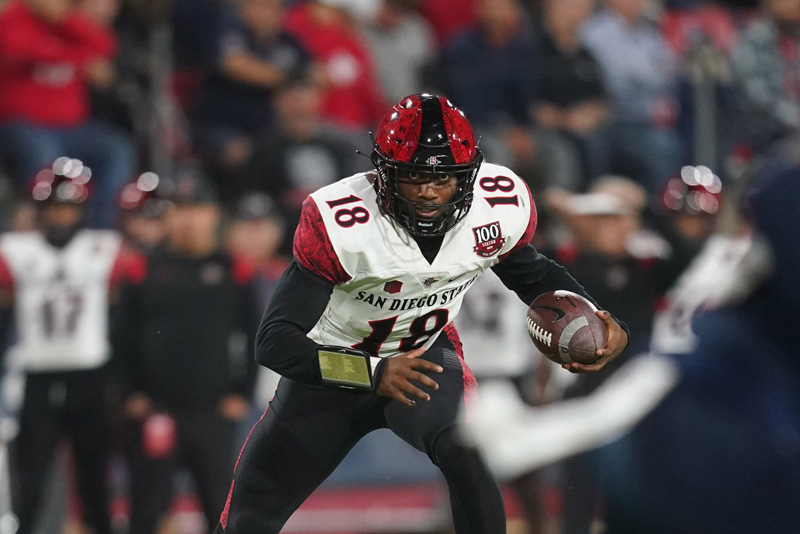 The San Diego State Aztecs will be at University Stadium in Albuquerque to battle the New Mexico Lobos in a Mountain West Conference on Friday evening. San Diego comes into its 11th game of the regular season with a 6-4 overall record and riding on a two-game winning streak after a 16-point win at home over the San José State Spartans at 43-27. San Diego State succeeded in their recent match after accumulating 425 yards of total offense including 268 passing yards in the victory.

Aztecs’ starting QB Jalen Mayden took control of the match, completing 17 of his 22 passes for 268 yards and totaling three TDs in the win while also rushing for 61 yards on 13 carries. RB Jaylon Armstead chipped in one touchdown by rushing for 46 yards and WR Tyrell Shavers pitched in 111 yards on four receptions in leading the ground offensive. WR Mekhi Shaw contributed 64 yards with a touchdown after hauling down five passes. WR Jesse Matthews chipped in 57 yards and one touchdown.

The New Mexico Lobos are back home to host the visiting San Diego State Aztecs on Friday evening. The Lobos come into this match-up with six successive losses including their recent 32-point road loss to the Air Force Falcons at 3-53 last week. New Mexico’s offense has issues in penetrating the Air Force defenses after compiling only 172 total yards of offense. The team converted just four third downs in scoring three points in the loss. The defense for New Mexico collapsed allowing the Falcons to gain almost 500 yards of total offense in scoring 53 points.

QB Justin Holaday of the Lobos struggled distributing the ball after completing just 10 of his 21 passes for 128 yards and also running the ball 12 times for four yards in the contest. RB Christian Washington led the rushing attacks for New Mexico with 24 yards on 7 grabs while WR Duece Jones accumulated a team-high 49 receiving yards on three catches.

San Diego State Aztecs vs. New Mexico Lobos. The NCAAF Pick for this contest is San Diego State -14.5. The Lobos are one of the worst teams in the league today and their struggle will continue in this match-up at home. The Aztecs will pick up their seventh victory on the road on Friday by stopping the ailing offense of New Mexico. Prediction: The  Aztecs will win 31-10.