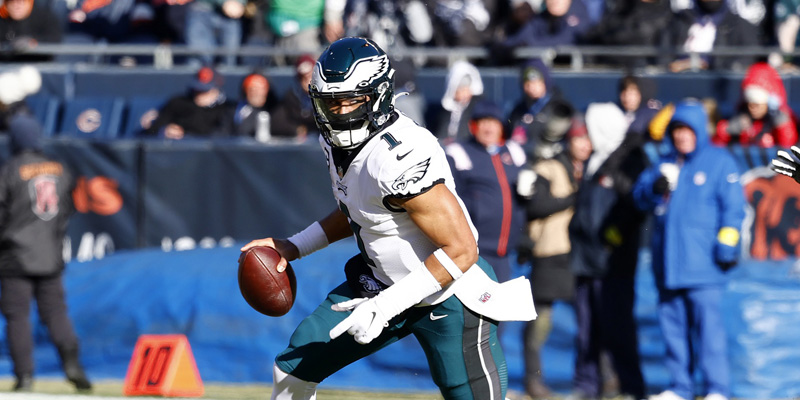 The Philadelphia Eagles will meet with the Chicago Bears in NFL action in Soldier Field, IL, on Sunday, December 18, 2022, at 1:00 PM ET. Philadelphia defeated the Giants handily last week to win their fourth straight game; this week, they take on the Bears in an attempt to make it 5 consecutive victories overall. The Eagles are now 12-1 overall and have a two-game advantage over the Cowboys in the NFC East. Philadelphia dominated the Giants, leading 7-0 after the first quarter and 21-0 midway through the second to secure the lopsided victory. The Eagles had a 437–304 lead in total offense, 27 while giving up just 18, and a 32:30–27:30 advantage in time of possession.

The Eagles’ passing offense in season is 14th in the league with 229.8 yards per game, while their rushing offense is tied for second with 162.2 yards per game. Philadelphia leads the league in scoring offensively with 29.7 points per game while ranking seventh with 19.1 points allowed per game on defense. Jalen Hurts threw for 3,157 yards on 264 of 388 attempts, 22 touchdowns, three interceptions, and 34 sacks. He has 139 carries for 686 yards and 10 TDs, which puts him second on the club in rushing. Miles Sanders produces 204 carries for 1,068 yards and 11 TDs.

Chicago enters this match after having a bye last week and is looking to break a six-game losing streak that was prolonged by their defeat to the Packers two weeks ago. The Bears’ season record dropped to 3-10, placing them last in the NFC North and excluding them from postseason contention. Chicago fared well against the Packers for three quarters before losing their edge. The Bears led after the first quarter, 16-10 at the half, and 19-10 after three, only to lose after being outscored 18-0 in the fourth quarter.

Philadelphia Eagles vs Chicago Bears. The NFL pick for this game is the Philadelphia Eagles. Since the Eagles are tied for second in the league in terms of rushing offense entering week 15, the Bears have the top-run offense in the league. That may be an issue for the Bears’ defense, which allowed a league-worst 21 running touchdowns this season and ranks 27th in the league at stopping the run (146.3 yards per game). Chicago lacks the offensive firepower to compete with strong offensive teams, despite their recent improvement in offensive stats. Fields can’t do it all by himself, and the defense lacks the tools to stifle the Eagles’ offense. Despite Chicago’s valiant attempt, the Eagles win this match and cover the spread to move up to 13-1. The Philadelphia Eagles will win to a predicted score of 28-20.