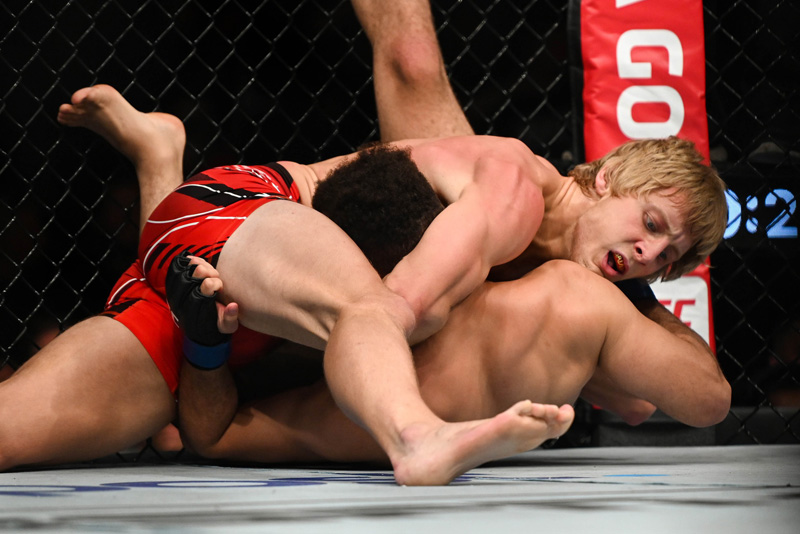 Paddy Pimblett and Jared Gordon will square off on Saturday in UFC 282 at the T-Mobile Arena in Paradise, Nevada. Pimblett enters this fight with a 19-3 tally and won 47% of his fights by submission. “Paddy the Baddy” is one of the fastest-rising UFC pugilists and is heavily favored to pick up the win over Jared Gordon. Pimblett’s aggressive style of playing is a factor in this favored win over Gordon. The UFC betting picks don’t expect this fight to go the distance.

Pimblett won each of his last 5 duels and recently came off a July victory over Jordan Leavitt. Paddy is averaging 4.19 significant strikes per minute, with an accuracy percentage of 53 percent. Pimblett averaged 1.88 takedowns with a 40% accuracy rating. The Baddy is coming off a submission win at UFC Fight Night 208 earning him the right to fight in this match. He’s earned the bonus in each of his last 3 bouts. In the win, Pimblett landed 30 total strikes and made a takedown. Paddy is now 3-0 under the UFC banner and hasn’t lost overall since September 2018.

The 28-year-old warrior is a black belt in BJJ and has 9 career submission victories. The Baddy is aggressive with his takedowns and tires on his opponent in the clinch. Pimblett also has an underrated striking game, and his chin is top-quality. Pimblett did not suffer any knockouts in his career. He is quickly rising to become a star and has a chance to eventually push for a title shot. This will be Pimblett’s second career fight in Nevada.

Jared “Flash” Gordon is fresh off a dominant decision victory over Leonard Santos last August; he had a 116-36 edge in significant strikes that allowed him to bounce back from a submission loss to Grant Dawson earlier this year.

Gordon is 7-4 in the UFC arena, with his last six victories coming by points in the match. The 34-year-old is a well-rounded fighter who can maintain a good pace with his crisp boxing and chain wrestling. The Flash enters this fight with a 19-5 record and has won 58 percent of his fights by decision.

Gordon won 4 of his last 5 fights with his recent win last August against Leonardo Santos. Gordon is averaging 5.33 significant strikes per minute with an accuracy percentage of 58 percent. The Flash is averaging 1.97 takedowns with an accuracy percentage of 39 percent. Gordon is coming off a decision win at UFC 278 where he hit 203 total strikes. Gordon is now 7-4 under the UFC banner and has won all 11 of his career decisions. A brown belt in BJJ, Gordon strikes accurately with knockout pop that’s produced 6 knockouts in his sterling career. Gordon has some takedown ability and has 2 career wins via the rear-naked choke. Gordon has been knocked out in 4 of his 5 career losses. At 34 years old, the match with the Baddy feels like Gordon’s late opportunity to take that next step in his career. This is Gordon’s fourth fight of his career in Nevada.

Gordon has the wrestling and ground control to make this a close-quarter battle. Unfortunately, he lacks the finishing ability to really put a scare into Pimblett. This seems to be a bout where Pimblett will pull the strings in the later rounds of the match. The Baddy will find an opening where he can put the fight away. Pimblett is just too active and has a much higher finish rate to where he’s the more trustworthy guy in this situation. Pimblett will win this match.