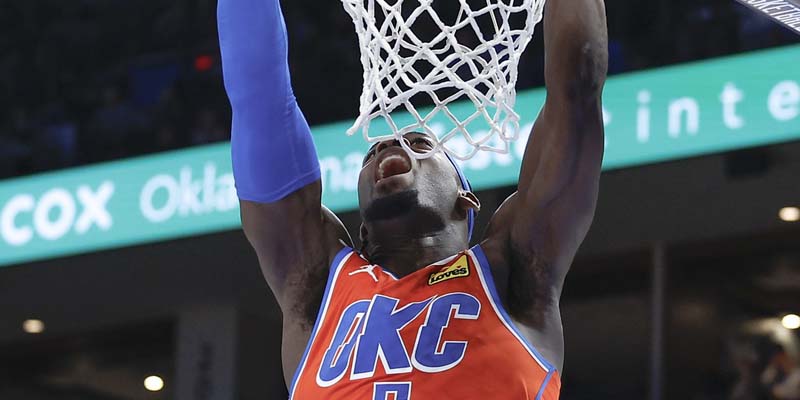 Tuesday night’s matchup between the Oklahoma City Thunder and the Miami Heat will be a reunion of sorts, as Thunder player Shai Gilgeous-Alexander and Heat player Tyler Herro will be facing off against each other. Gilgeous-Alexander, Kentucky alumni and 2018 first-round pick, has steadily grown as a player, improving his scoring average in each of his five seasons in the NBA. This season, the 24-year-old has truly established himself as a dominant force, averaging 30.9 points per game, along with 5.6 assists, 4.8 rebounds, and 1.6 steals. He is leading the Thunder in free-throw percentage (91.1), and has an impressive shooting record, with 34.3 percent on 3-pointers and 52.7 percent on 2-pointers. He has already had 24 games this season with at least 30 points. It will be interesting to see how Gilgeous-Alexander and Herro will match up against each other.

The Thunder is averaging 116.5 ppg, with a 46.3 percent field goal shooting average. They are allowing 116.7 points per game, with the opponents shooting 46.7 percent. Shai Gilgeous Alexander is the team’s leading scorer with an average of 30.9 points per game, and also leads the team in assists with an average of 5.6 per game. Josh Giddey is the second-best player with 15.3 points and 5.4 assists. Luguentz Dort is the third-leading scorer, Jalen Williams is the best rebounder with 3.8 per game and the team is shooting 35.7% from 3pt range and 79.2%

At “ The Sunshine State “, Miami’s own Tyler Herro is a rising star, with a fierce determination to win. His career-high 21.2 points per game is a testament to his hard work and dedication to the game. Despite being just 22 years old, Herro is showing a level of maturity and skill beyond his years, averaging 6.0 rebounds and 4.4 assists per game, as well as a steal per game. Another exciting player to watch on the Heat is none other than the powerhouse center, Bam Adebayo. He is a force to be reckoned with, averaging a staggering 21.4 points and 9.9 rebounds per game, despite currently battling a thigh injury and a hand contusion. He’s determined to play through the pain and lead his team to victory. The matchup between Oklahoma City Thunder and Miami Heat is definitely not one to be missed, as the Kentucky alumni are set to bring the heat on the court.

The Miami Heat is averaging 108.7 points on 45.2% FG shooting and allows 109 points on 47.6 percent shooting from the field. SF Jimmy Butler is averaging 21.6 points and 6.4 rebounds while Center Bam Adebayo is averaging 21.4 points and 9.9 rebounds. Tyler Herro is the third double-digit scorer and Kyle Lowry has 4.4 rebounds. The Heat is shooting 34 percent from beyond the arc and 81.9 percent from the free-throw line. The Miami Heat are allowing 36.7 percent shooting from deep and are grabbing 40.7 rebounds per game.

Oklahoma City Thunder vs Miami Heat. The NBA pick for this contest is the Oklahoma City Thunder. Oklahoma City is riding high on a wave of success from last week, ready to take on all challengers with their fierce and determined spirit. They play with a chip on their shoulder and are known to rise to the occasion as underdogs, losing by an average of only 0.7 points. The Miami Heat, on the other hand, has a tendency to underestimate their opponents, and tonight they may have to face the challenge without key players Herro and Bam. But it’s not all bad news for the Heat, they are a resilient team that tends to find a way to win on their home court, winning by an average of 0.3 points. In this matchup, my money is on the Oklahoma City Thunder to come out on top predicted to a score of 116-110.