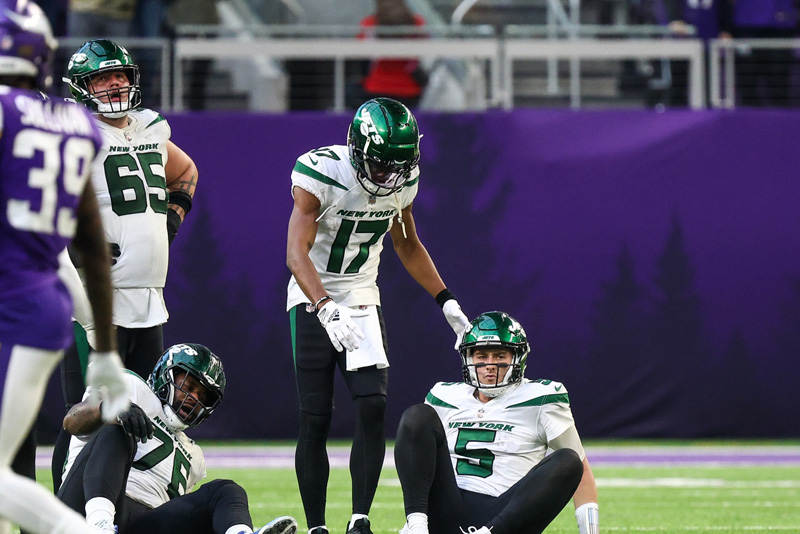 Week 14 of the NFL regular season presents the New York Jets and Buffalo Bills matchup on Sunday, December 11th, 2022 at Highmark Stadium in Orchard Park, New York at 1:00 PM ET. The Jets succumbed to the Minnesota Vikings 27-22 last week; the team is 4-2 in road matches. In week 9 of NFL hostilities, New York beat the Bills in close-quarter fashion. The NY Jets are 3rd at 7-5 in the AFC East Division.

The New York Jets lost two of their first three outings to the Baltimore Ravens and the Cincinnati Bengals. The Jets would then hit a 5-1 trail of winners against the Pittsburgh Steelers, Miami Dolphins, Green Bay Packers, Denver Broncos, and the Buffalo Bills. After losing to the New England Patriots, New York bounced back with a win over the Chicago Bears. QB Mike White threw for 369 yards with two picks and RB Zonovan Knight led the rush on 90 yards in last Sunday’s loss.

Meanwhile, The Buffalo Bills bowed out to the Jets in Week 9 of this season. The Bills’ offense was limited to only 317 yards with no TDs. Bills QB Josh Allen connected on 18 of his 34 passing attempts committing a pair of picks. Allen suffered five sacks against the Jets threatening the front line. Buffalo is leading at 9-3 in the AFC East Division.

The Bills are 6-4 in their last 10 matches of the season. Buffalo won 2 games in a row before stumbling off in a loss to the Miami Heat. Buffalo would then summarily put down the Baltimore Ravens, Pittsburgh Steelers, Kansas City Chiefs, and Green Bay Packers. The string of victories was then snapped by straight losses from the New York Jets and Minnesota Vikings but rose back to win over the Cleveland Browns and the Detroit Lions.

New York Jets vs. Buffalo Bills. The NFL Pick for this contest is Buffalo -9.5.  Buffalo’s defense allowed an average of just 17.4 ppg which is 4th in the league while New York gave up an average of 18.6 ppg this season. The loss of Miller will signal a rallying cry for the Buffalo team capable of achieving its dream of winning the Super Bowl. Go for Buffalo to win and cover a 9.5-point spread. The prediction: The Buffalo Bills will win 28-14.