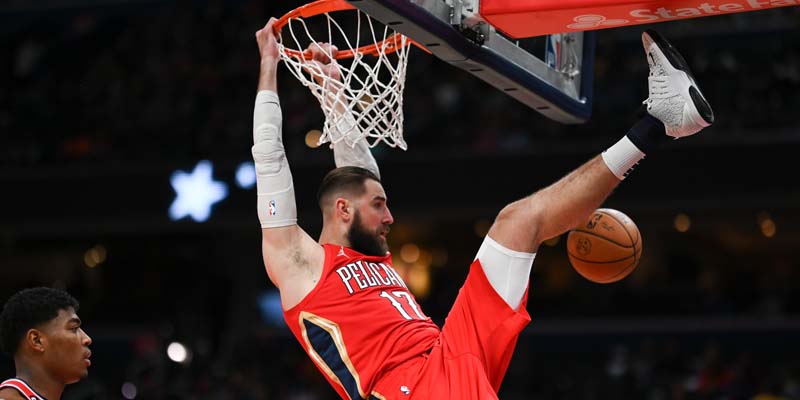 The New Orleans Pelicans gear up to take on the Celtics at TD Garden in Boston, MA on Wednesday night; the team aims to end the Celtics’ thrilling five-game home winning streak. New Orleans played without leading scorer Zion Williamson (26.0 points per game) and Brandon Ingram (20.8) but the Pelicans set a season high for points in Monday night’s 132-112 triumph over Washington. SG CJ McCollum scored a game-high 34 points and New Orleans also received 27 points and 12 rebounds from center Jonas Valanciunas. It was McCollum’s fourth consecutive game with at least 25 points and the fifth straight double-double for Valanciunas.

The Pelicans are 6-4 in their last 10 matches of the season. The team is 117.4 points on 47.9% shooting and allowing 113 points on 47% shooting per game. PF Zion Williamson is averaging 26 points and 7 rebounds while SF Brandon Ingram is averaging 20.8 points and 5.1 rebounds. SG CJ McCollum is the third double-digit scorer and Center Jonas Valanciunas grabs 9.7 rebounds. New Orleans is shooting 36.5% from beyond the arc and 78.2% from the FT line. The Pelicans are allowing 34.3 percent shooting from deep and are grabbing 45.5 rebounds per game.

Meanwhile, The Boston Celtics displayed remarkable resilience and a positive mindset, led by Tatum who had 32 points, eight rebounds, and seven assists in the victory over the Chicago Bulls, Monday. Tatum’s impressive performance is indicative of his incredible season, averaging a team-high 30.8 points per game, a feat that hasn’t been accomplished by any Celtic player since Larry Bird in 1987-88. Boston is on top at 29-12 of the NBA competing chain.

The Celtics average 118.5 points on 47.8% FG shooting and allow 112.6 points on 46.9%  from the field. Tatum is averaging 30.8 points and 8.1 rebounds while SG Jaylen Brown averages 26.8 points and 3.3 assists. PG Malcolm Brogdon is the third double-digit scorer and SG Marcus Smart grabs 3.4 rebounds per game. Boston is shooting 37.1% from the 3-point area and 82.6% from the FT line. The Boston Celtics are allowing 35.5 percent shooting from deep and are grabbing 44 rebounds per game.