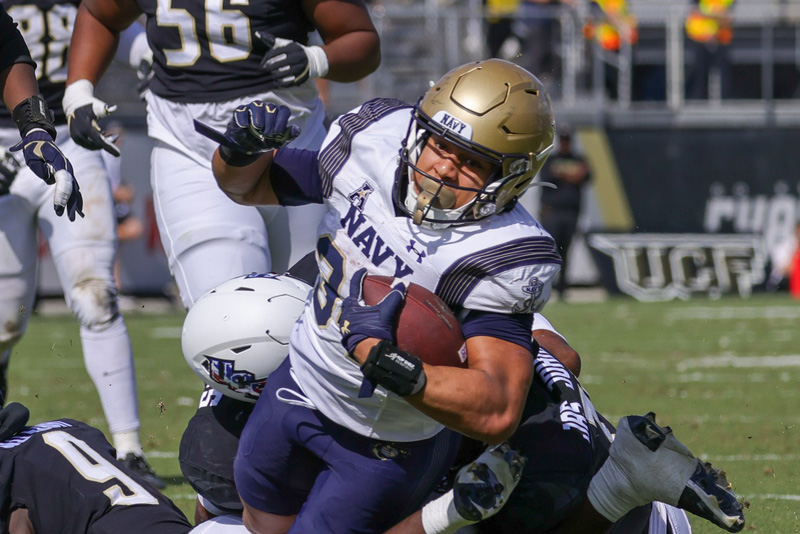 The Navy Midshipmen will bash bodies with the Army Black Knights in the 117th meeting between the two schools on Saturday at Lincoln Financial Field in Philadelphia, Pennsylvania. The Navy capped its regular season 4-7 overall and was 4-4 in American Athletic Conference standings. The Midshipmen defeated UCF 17-14 in their final game of the regular season. The Midshipmen limp into this one on the season, though a win the last time out might just be enough to propel the unit forward.

The Navy Midshipmen lost 5 of their last 8 road matches. QB Tai Lavatai completed 46.2% of his passes for 787 yards, 5 touchdowns, and 3 interceptions. Jayden Umbarger and Mark Walker have totaled for 507 receiving yards and 3 touchdowns. WR Vincent Terrell Jr. has 9 receptions. The Midshipmen ground game averaged 239.5 yards per contest. RB Daba Fofana leads the way with 749 yards and 6 TDs. The Navy’s defense allows 24.7 points and 356.2 yards per game. John Marshall leads the Navy Midshipmen with 88 tackles, Jacob Busic has 6 sacks, and Elias Larry had 2 interceptions.

Meanwhile, the Army Black Knights concluded its regular season 5-6 and is an independent not playing in any conference. The Black Knights shook down the UMass Minutemen 44-7 in their last game of the regular season before their annual meeting with the Navy. Quarterback Tyhier Tyler passed for just 67 yards and rushed for 101 yards and three touchdowns. The Army gained 396 yards of total offense and held UMass to 235 yards of total offense with four forced UConn turnovers.

The Black Knights lost 4 of their last 5 road outings. Cade Ballard completed 50 percent of his passes for 335 yards, 2 touchdowns, and 2 interceptions. Isaiah Alston and Ay’Jaun Marshall summed for 477 receiving yards and 3 touchdowns. WR Braheam Murphy had 4 receptions. The Army’s ground game is averaging 304.3 yards per contest. Tyler leads with 601 yards and 12 TDs. The Army’s defense allowed 23 points and 366.1 yards per game. Leo Lowin leads the Army Black Knights with 84 tackles, Andre Carter II has 3 sacks, and Marquel Broughton has 3 interceptions.

Navy Midshipmen vs. Army Black Knights. The MLB Pick for this contest is the Army Black Knights. Each of these two teams is more than ready to face the other in this match-up on Saturday, whatever the outcome may be. However, the Navy had difficulty scoring points in the regular season after averaging only 22.5 ppg while the Army made 29.4 ppg. The Army’s defense controlled the scoring of their rivals to an average of just 23.0 PPG. The Army Black Knights will win 21-17.