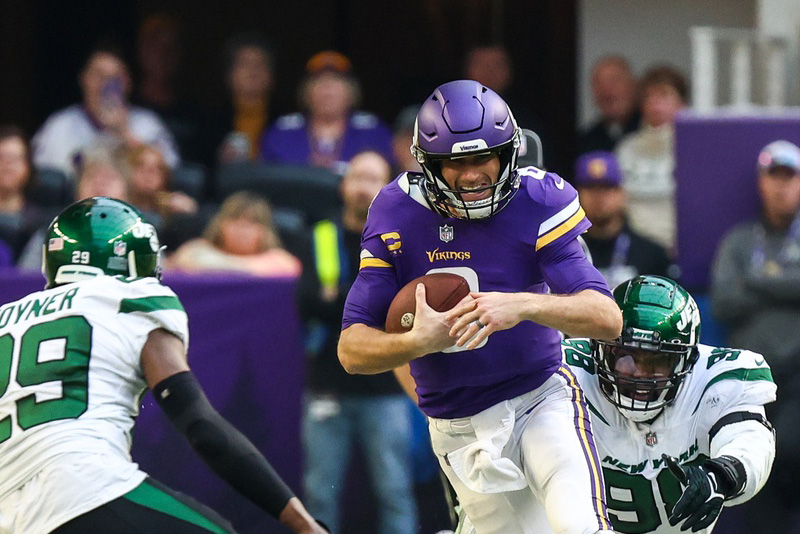 The Minnesota Vikings will invade Ford Field on Sunday to play with the Detroit Lions at 1:00 PM (EDT). The Vikings are currently 10-2 to lead the NFC North Division after its 27-22 victory over the New York Jets last Sunday. Minnesota has a five-game lead over Detroit. The Vikings gained only 287 yards of total offense but converted a pair of Jets turnovers. QB Kirk Cousins passed for 173 yards with one touchdown for Minnesota.

Minnesota kept finding ways to win. The team currently sits with the second-best record in the NFL heading into a showdown in their division. Another victory will earn Minnesota the division in four weeks. Last week, at home vs. the Jets, the Vikings were able to survive over an AFC East rival – the New York Jets. The Vikings survived a furious Jets’ rally in an attempt to steal the game but were turned away on a pick by Camryn Bynum at the 1-yard line with 10 seconds left. The victory swept the AFC East competitors with all of the wins decided by a single score.

At “ The Motown Country “, the Detroit Lions improved to 5-7 after a 40-14 victory against the Jacksonville Jaguars last Sunday. Detroit places second in the NFC North but is a distant five games behind the Vikings. The Lions made 437 yards of total offense and held the Jags to 266 yards of defense. Quarterback Jared Goff connected for 340 yards and two touchdowns while WR Amon-Ra St. Brown grabbed 11 passes for 114 yards and a couple of touchdowns.

Detroit almost threw the Bills off their tracks on Thanksgiving Day. The Lions then clawed their mark on the Jaguars with a 40-15 clobbering of Jacksonville. The Lions are currently four out of five games and are back in contention for a playoff berth. On Sunday, QB Jared Goff went 31-of-41 for 341 yards to lead an offense that did need a punt in the match. Detroit scored on all five of their drives in the first half for a 17-point lead.

Minnesota Vikings vs Detroit Lions. The NHL pick for this game is the Detroit Lions. The Lions will stage an upset over the Vikings at home on Sunday. The play here is OVER. The OVER cashed in four of the last five meetings between the Lions and Minnesota as well as in four of the last five meetings that Detroit hosted the Vikings. Minnesota’s defense is allowing an average of 23.3 ppg, while Detroit is giving up an average of 27.0 ppg which is last. Final Score Prediction, Detroit Lions win but our best play is OVER 30-27.