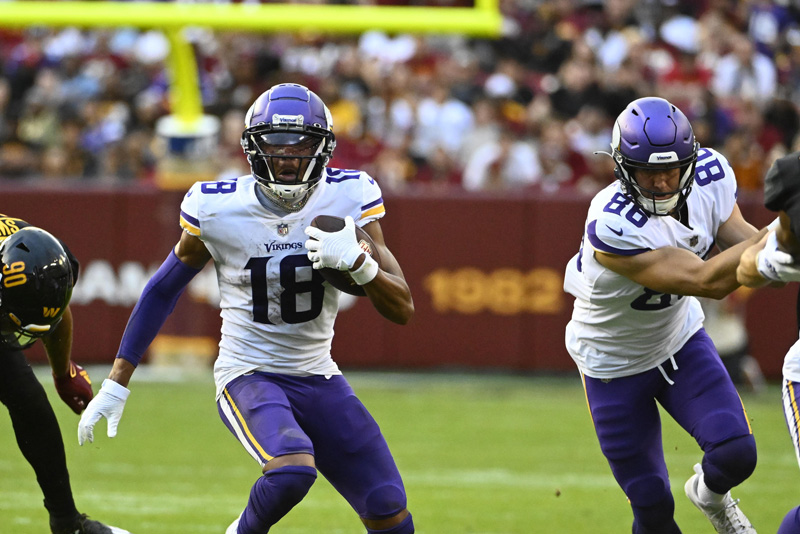 The Minnesota Vikings and the Buffalo Bills will clash at Highmark Stadium in Orchard Park, NY on Sunday at 1:00 PM ET. Minnesota improved to 7-1 and took the lead in the NFC North Division after a three-point road triumph over the Washington Commanders 20-17 last week. The Vikings’ defense limited the offense of Washington to just 263 yards of total offense while gaining 301 total yards. QB Kirk Cousins completed 22 of his 40 passes for 265 yards and connected two TDs with only one interception in leading the Vikings in the victory.

Vikings’ starting QB Kirk Cousins led the air offense with 1,999 yards and penetrated the end zone three times with six picks on the season. RB Dalvin Cook led the rushing attacks of the Vikings with 608 yards and nailed five TDs. WR Justin Jefferson chipped in three TDs for 867 receiving yards in reinforcing the ground offense for Minnesota. LB Jordan Hicks led the Vikings’ defensive line with 74 total tackles and the Minnesota Vikings totaled 24 sacks with eight interceptions as a unit.

The Buffalo Bills are back home to host the Minnesota Vikings in an NFL Inter-Conference match-up on Sunday. The Bills recently lost a road match to the Jets 17-20 that snapped a 4-game winning streak on November 6. Buffalo dropped to 6-2 overall but retained the lead in the AFC East with a 4-2 conference record and 3-0 at home. The Buffalo Bills’ defense allowed New York to gain 310 yards while earning a total of 317 yards of offense but committed two turnovers in the loss. QB Josh Allen led the passing offense for 205 yards but intercepted twice while Allen also rushed for 86 yards on 9 carries with two TDs in the loss.

Starting QB Josh Allen threw for 2,403 yards and connected 19 TDs with eight picks while rushing for 392 yards with four TDs in leading the running game. RB Devin Singletary is the next leading rusher for 347 yards. WR Stefon Diggs led the receiving unit with 857 and landed seven TDs for the season. On defense, LB Tremaine Edmunds tallied 63 total tackles while the Buffalo Bills tallied 23 sacks and 11 picks throughout the season.

Minnesota Vikings vs. Buffalo Bills. The NFL Pick for this contest is Buffalo -7.5. The Bills just came out from a strenuous road loss to the New York Jets but will try to get back by winning this game at home on Sunday. Buffalo’s defense gave up an average of just 14.8 PPG which ranked first in the league and the Bills are third in scoring with an average of 27.5 PPG. Prediction: The Buffalo Bills will win 27-17.