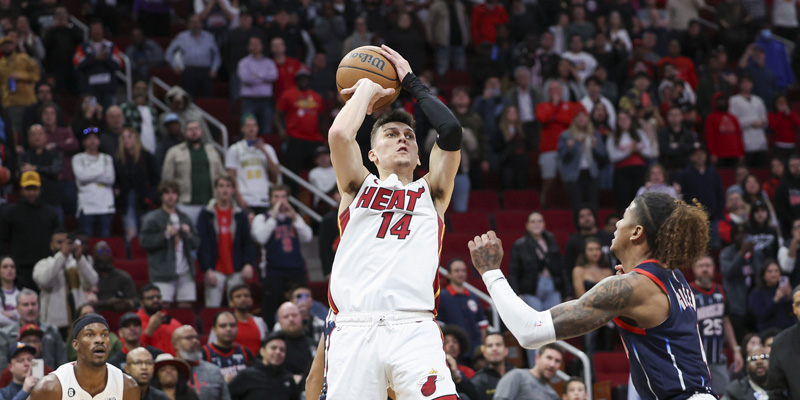 The Miami Heat and the San Antonio Spurs will have a showdown in Arena Ciudad de Mexico in Mexico City, Mexico on Saturday evening. The Heat is on a 3-game winning run after winning over the Huston Rockets to a score of 111-108. Miami put 14 more points over the Rockets in the second quarter and continued its sizzle to a road victory. Miami currently ranks seventh in the league in defensive efficiency. The team is 7th at 15-15 in the Eastern Conference and is on top of the Southeast Division.

The Heat is 6-4 in its last 10 matches on the season. Miami averages 107.9 points on 45% FG shooting and allows 109.3 points on 47.1% shooting from the field. SF Jimmy Butler is averaging 21.7 points and 6.7 rebounds. Center Bam Adebayo is averaging 20.8 points and 9.5 rebounds. Tyler Herro is the third double-digit scorer while PG Kyle Lowry is grabbing 4.8 rebounds. The Miami Heat is shooting 33.7 percent from beyond the arc and 83.2 percent from the free throw line. The Miami Heat are allowing 35.7% shooting from deep and are grabbing 41.3 rebounds per game.

At “ The Alamo “, The San Antonio Spurs lost 11 of their first 16 home-defense games and are looking to take in once-in-a-generation talent Victor Wembanyama. In their recent match, The Spurs trailed by 16 points at the half and could not climb out of a  112-128 home loss to Portland. The Spurs drained 11-for-29 from the three-point territory and shot 46 percent overall. San Antonio is 14th at 9-19 in the Western Conference and fourth in the Southwest Division.

The Spurs average 110 points on 46.3% FG shooting and allow 120.4 points on 50.6% shooting from the field. SG Keldon Johnson is averaging 20.9 points and 5.2 rebounds. Devin Vassell averages 20.4 points and 3.5 assists. Center Jakob Poeltl is the third double-digit scorer while Tre Jones is grabbing 3.4 rebounds. San Antonio is shooting 33.9 percent from beyond the arc and 72.9% from the FT line. The San Antonio Spurs are allowing 39.6 percent shooting from deep and are grabbing 42.5 rebounds per game.

Miami Heat vs San Antonio Spurs. The NBA Pick for this contest is the Miami Heat. Miami received a $25k injury reporting fine last time out after listing every player on their roster on the injury list. The Spurs play at the seventh fastest tempo and the Heat will find their rhythm from deep against a porous defense. Take the over. Prediction: The Miami Heat will win 118-111.