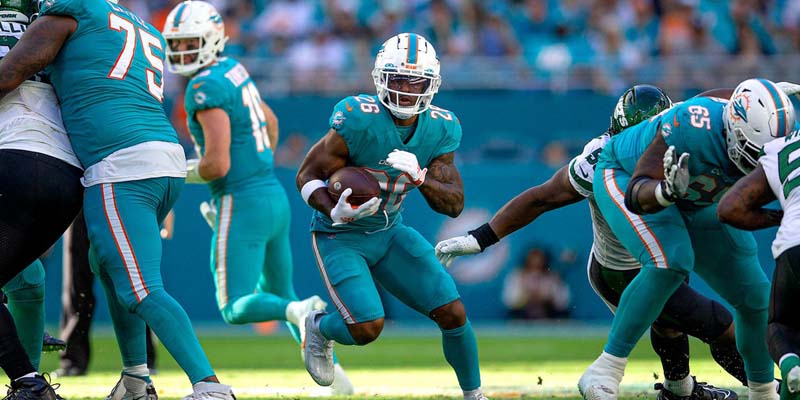 The Miami Dolphins will fiercely battle the Buffalo Bills in an electrifying AFC Wild Card Playoffs match at Highmark Stadium, NY, on Sunday, January 15, 2023, at 1:00 PM ET. Unfortunately, starting quarterback Tua Tagovailoa failed the protocol last week and will not be participating in the wild-card game, leaving the Dolphins with a questionable quarterback situation. With Teddy Bridgewater, who has thrown for 683 yards, 4 touchdowns, 4 interceptions, and has a 48.7 QBR, being labeled questionable to play due to a knee and right finger injury, the Dolphins will have to fight tooth and nail to secure the victory.

The Buffalo Bills finished their regular season on an impressive 13-3 run and lead the AFC East Division. The Bills placed second to the Kansas City Chiefs in the AFC standings. Buffalo defeated the New England Patriots 35-23 in their final game of the regular season. The Bills won each of its final seven games of the regular season and finished the season scoring an average of 28.4 points per game and allowing an average of 17.9 points per game.

The Bills come in as the #2 seed with QB Josh Allen throwing for 4,283 yards, 35 touchdowns, and 14 picks on 63.3% passing while also posting 762 rushing yards this season. RB Devin Singletary has 819 rushing yards. WRs James Cook had 507 rushing yards and Stefon Diggs leads Buffalo’s receiving group with 108 grabs for 1.429 yards and 11 TDs. Gabriel Davis has 836 receiving yards and 7 TDs as well this season. Five other Bills made 100+ receiving yards as well on the season. Tremaine Edmunds has a team-high 102 total tackles while Greg Rousseau and Von Miller each have a team-high 8 sacks this season for their defense.

Miami Dolphins vs Buffalo Bills. The NFL pick for this game is the Buffalo Bills. Buffalo will pick up the victory at home on Sunday and move on to the AFC divisional games and the play here is OVER. The OVER prevailed in seven of the last eight meetings between the Dolphins and Bills played in Buffalo as well as in 11 of the last 16 overall between Miami and Buffalo. Miami allowed an average of 23.5 points per game which was 24th in the NFL and Buffalo scored an average of 28.4 points per game which was second-best in the NFL. Prediction, Buffalo Bills win but our best play is OVER 31-17.