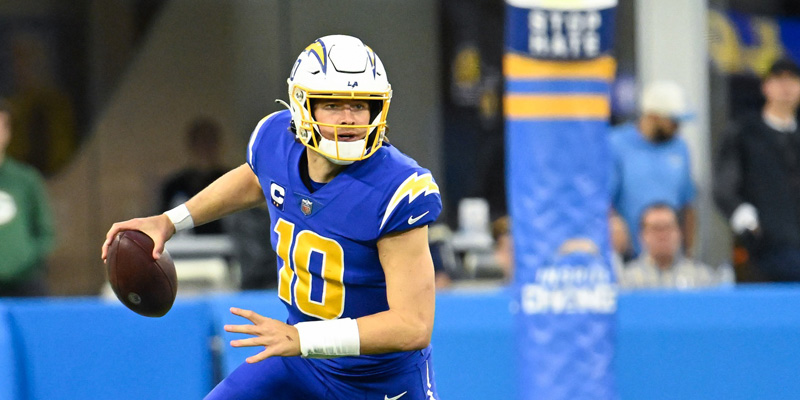 An American Football Conference showdown will happen at Lucas Oil Stadium in Indianapolis, Indiana between the Los Angeles Chargers against the Indianapolis Colts on Monday evening at 8:15 PM (EDT). The Chargers (8-6) won three of their last four games and are currently in sixth place in the AFC standings. Cameron Dicker nailed a 43-yard field goal with 43 seconds remaining to lift Los Angeles to a 17-14 home victory versus Tennessee last Sunday.

The Los Angeles Chargers won 4 of their last 6 road games. QB Justin Herbert completed 67.5% of his passes for 4,019 yards, 21 TDs, and 9 interceptions. WRs Joshua Palmer and Mike Williams summed up 1,407 receiving yards and 7 touchdowns while Austin Ekeler had 95 receptions. The LA Chargers’ ground game averaged 83.7 yards per contest and Ekeler led with 692 yards and 9 TDs. Los Angeles is allowing 24.3 points and 354.5 yards per game. Drue Tranquill leads the Los Angeles Chargers with 118 tackles, Khalil Mack has 7 sacks and Bryce Callahan has 3 picks.

Meanwhile, The Indiana Colts will open this contest on a 4-game losing slump after losing to the Vikings 36-39 in OT, Sunday. The Colts led by as many as 33 points at halftime and allowed Minnesota to stage the biggest comeback in NFL history. Indianapolis won in turnovers at 3-1 but allowed a massive 518 total yards. The Colts racked up 171 yards despite Jonathan Taylor’s exit early in the first quarter to a season-ending ankle injury.

The Colts lost 4 of their last 5 home games. QB Matt Ryan completed 67% of his passes for 3,057 yards, 14 TDs, and 13 interceptions. WRs Michael Pittman Jr. and Parris Campbell totaled 1,325 receiving yards and 5 TDs while Alec Pierce had 32 receptions. The Indianapolis Colts’ ground assault averaged 105.2 yards per contest and Jonathan Taylor led with 861 yards and 4 touchdowns. Indianapolis is allowing 24.1 points and 329.3 yards per game. Zaire Franklin leads the Indianapolis Colts with 141 tackles, Yannick Ngakoue has 9.5 sacks, and Stephon Gilmore has 2 picks.

Los Angeles Chargers vs Indianapolis Colts. The NFL pick is the Los Angeles Chargers. The LA Chargers look like a team that could easily fall apart after proving themselves ripe for the occasion. But then again the Colts is a team that made history by giving up a 33-point lead at the half. It is obvious that Indianapolis’ morale hit rock bottom. Expect this team to play flat in this contest. Predicted to win this match is Los Angeles at 27-21.