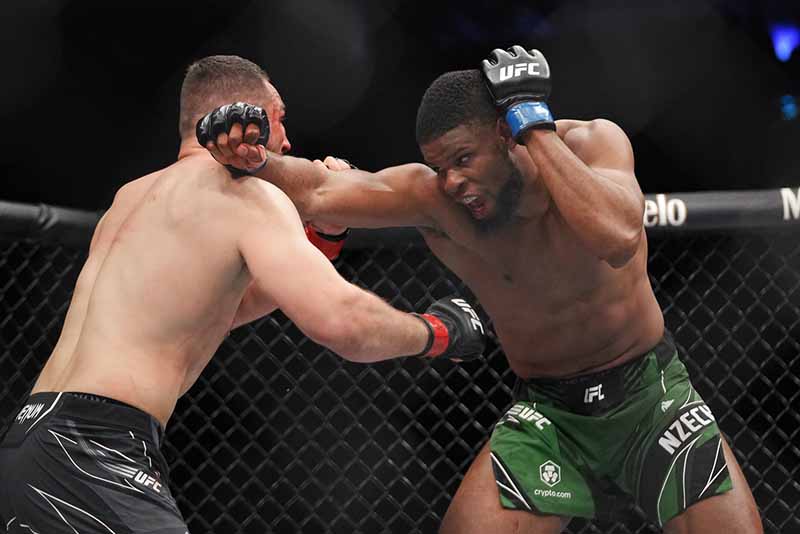 Kennedy Nzechukwu vs. Ion Cutelaba is scheduled for three rounds in the light heavyweight division as a featured undercard attraction of this weekend’s UFC Fight Night from the Apex Center in Las Vegas, Nevada.

Nzechukwu and Cutelaba are going in opposite directions. Nzechukwu slowly makes his way up the ladder while the latter dips into deep waters. The African Savage recently snapped a two-fight skid by pummeling Karl Robinson three months ago and hopes his freakish length and size carry him to another win here. Nzechukwu lacks consistency and depth on his resume. He was 6-0 before joining the UFC and went 4-3 since.

Nzechukwu lands 4.68 significant strikes per minute at 44% accuracy and has an incredible 83-inch reach. He is a solid finisher with seven of his 10 wins coming by knockout with an average fight time of 10:34. The southpaw also possesses a four-inch height advantage and an eight-inch reach advantage over Cutelaba.

It’s no surprise that Nzechukwu is the UFC odds favorite at -175 based on his recent form. Cutelaba has only won twice in seven tries since 2019, and his downward trend makes him the underdog at +150.

Cutelaba can’t buy a win to push him into the next level, so he’ll have to settle for stepping back in hopes of avoiding another loss for now. His recent troubles saw him submit in back-to-back first-round losses to Johnny Walker and Ryan Spann, and it wasn’t too long ago when he was stopped in a pair of bouts versus Ankalaev.

“Hulk” might not be an appropriate moniker, but Cutelaba does a lot of things well when he’s on his game. He lands 4.61 significant strikes per minute at 42% accuracy and averages 4.68 takedowns per 15 minutes at 63% accuracy. Like Nzechukwu, he is a solid finisher with 14 of his 16 wins coming inside the distance.

For Nzechukwu to win, he just needs to keep Cutelaba at the end of his long reach and sit down on his power shots to test his opponent’s eroding strike resistance. His takedown defense should be enough to keep the fight standing. Nzechukwu can’t win if he gives up his physical advantages or spends too much time on the mat. Cutelaba has struggled against elite fighters, but he might have more success here than the odds suggest.

This isn’t an easy fight to predict because it depends wholly on Nzechukwu keeping Cutelaba on the outside. Once Cutelaba gets in, there’s no telling what will happen as his opponent is far from “Savage” when he gives up his distance. He’s been submitted and stopped by strikes due to the one-dimensional nature of his offense.

The only thing that’s pushing us to pick Nzechukwu, in the end, is that he is likely to land his big shots first as Cutelaba needs to circumvent physical obstacles to get his offense going. However, this is a shaky pick as the fight could turn in the veteran’s favor the longer it goes on.

Kennedy Nzechukwu vs Ion Cutelaba. Predicted to win this fight is Kennedy Nzechukwu. With his Bulk and size advantage. He will go for the win and crush Ion Cutelaba. Cutelaba should be a sneaky upset, but his recent form is concerning. A strong gust of wind could be enough to get him stunned, and moral victories aside, he’s clearly missing what it takes to compete at the highest levels of the division. Nzechukwu isn’t that caliber of a fighter, either. If anything, they’re just as good as each other.