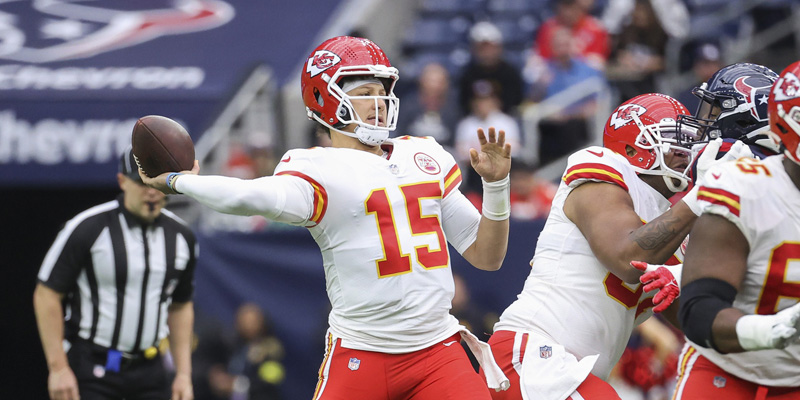 The Kansas City Chiefs will go against the Houston Texans in NFL action in NRG Stadium, Houston, on Sunday, December 18, 2022, at 1:00 PM ET. After coming through a close game against Denver on Sunday afternoon with a 34-28 victory, the Kansas City Chiefs are still the #2 seed in the AFC. The victory was the Chiefs’ eighth consecutive victory in Denver and 14th consecutive victory overall versus the Broncos. After taking an early 27-0 lead, it seemed like the Chiefs would have an easy day. Patrick Mahomes had a rare off day with three interceptions while throwing for 352 yards and three touchdowns. Two of quarterback Patrick Mahomes’ three touchdowns came from running back Jerick McKinnon, who also converted a no-look pass into a score.

Of course, one of the top offensive teams in football is the Kansas City Chiefs. Mahomes is on track to once again contend for league MVP with 33 touchdowns and only 11 interceptions. In addition, he is running third on the squad and averaging a club-best six yards per carry. The Chiefs’ scoring offense is second in the NFL, and they are the fifth-best in the end zone. They have the top passing offense in the league and the 18th-best rushing assault. They have the top overall offense in the league. The Chiefs are surprisingly only 27th in turnover differential.

The Houston Texans are two matches behind their nearest rival and currently has the worst overall record in the NFL (1-11-1). It appears certain that the Texans will choose first overall in this year’s NFL Draft. The Texans’ choice at quarterback is already up for dispute, but after momentarily believing David Mills, a second-year player, might be their future starter, the quarterback situation for the Texans is once again uncertain. This week, the 17-point underdog Texans used a two-quarterback scheme to combat the strong pass rush of the Dallas Cowboys while facing a depleted wideout squad. Mills and Jeff Driskel both got time at the quarterback position. Driskel had a TD pass in the game while playing in a wildcat/throwing role.

Houston dropped eight straight games and averaged just over 16 points per game, which ranks third lowest in the NFL. In terms of overall offense, the Texans are tied for worst in the league, while their passing attack is rated 26th. Additionally, they and Kansas City are tied for 27th place in the NFL for turnover differential. The Texans’ offensive game plan against the potent Chiefs will be intriguing to see. While top-ten running back Dameon Pierce will miss this week due to an ankle injury, wide receivers Nico Collins and Brandin Cooks are still listed as doubtful. Due to a hamstring ailment, CB Derek Stingley Jr. did not yet return to training this week.

Kansas City Chiefs vs Houston Texans. The NFL pick for this game is the Kansas City Chiefs. The Texans are a club that struggles to score and will play without their star rushing back, thus they are a team that the Chiefs will not lose to in back-to-back weeks. Since he threw 11 interceptions this season, Mahomes won’t have another game with three picks and can welcome back two of his wideouts. Turnovers are the Texans’ only hope to stay in this match, but they commit them just as regularly as the Chiefs do. The Texans have the lowest point differential in the NFL, while the Chiefs are tied for fifth worst. As they try to maintain their lead over the competition for the AFC’s top spot, the Chiefs should easily win this game. The Kansas City Chiefs will win to a predicted score of 33-17.