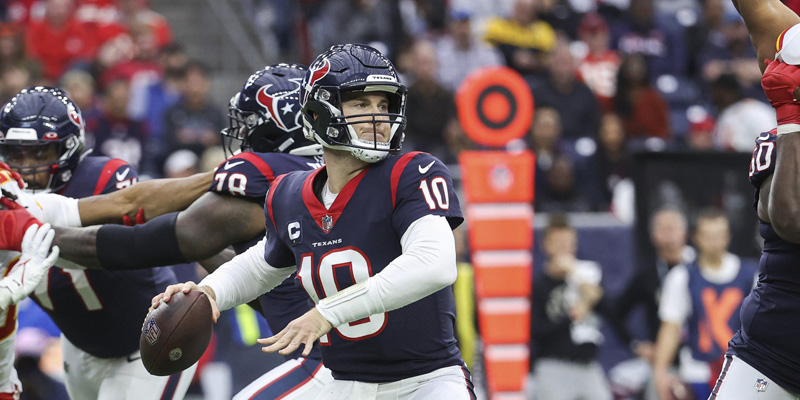 The Houston Texans will be at Nissan Stadium in Nashville, TN to clash with the Tennessee Titans (7-7) on Saturday afternoon at 1:00 PM (EDT). The Texans recently lost the Kansas City Chiefs to a score of 30-24 in OT as 14-point underdogs. The Texans are the worst team in the league this season and are on a nine-game losing slump. They will try to end that streak with a win over Tennessee that could earn them their second road win of the season.

The Texans will be looking to rebound from their OT loss to Kansas City in their last game. Davis Mills threw for 2,440 yards, 13 TDs, and 12 interceptions on 61.9% passing while RB Dameon Pierce led Houston in rushing with 939 rushing yards and 4 touchdowns. WR Brandin Cooks has a team-high 44 catches for 520 yards and WR Nico Collins has 481 receiving yards. Chris Moore has 480 receiving yards as well on the season. Jalen Pitre has a team-high 117 total tackles including 74 solo tackles while Jerry Hughes has 8 sacks for the team’s defense.

Meanwhile, the Tennessee Titans will try to increase their lead in the AFC South when they host the Houston Texans (1-12-1) on Saturday afternoon. Tennessee recently lost to the Los Angeles Chargers 14-17 as three-point underdogs. The Titans struggled last month and are on a 4-game losing slide. The loss led to the Jaguars trailing by only a game for the top spot in the AFC South.

The Tennessee Titans will be out to snap a four-game losing skid after a loss to the Chargers in their last game. Ryan Tannehill threw for 2,536 yards. 13 touchdowns and 6 picks on 65.2% passing. RB Derrick Henry leads the Titans with 1,303 rushing yards and 12 touchdowns this season. WR Robert Woods leads the Titans with 40 receptions for 418 receiving yards and five other Titans have at least 350 receiving yards this season. Kevin Byard has a team-high 89 total tackles while Denico Autry has 7 sacks and Jeffery Simmons has 7.5 sacks for their defensive figures. Rashad Weaver also has 5.5 sacks on the year for the Titans.

Houston Texans vs. Tennessee Titans. The NFL Pick for this contest is the Tennessee Titans. The Texans struggled in winning games the whole season while the Titans split their last 14 matches. Houston scored an average of just 16.8 PPG which is 30th in the league while their defense gave up an average of 24.6 PPG, 26th in the NFL. The Texans have the home-court advantage with the crowd behind them on Saturday. Prediction: The Titans will win 27-14.