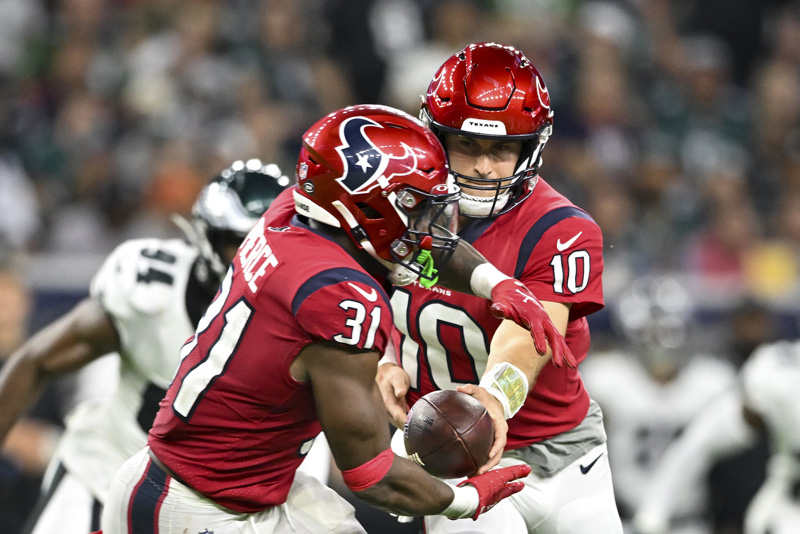 The MetLife Stadium in East Rutherford will witness NFL hostilities between the Houston Texans and the New York Giants on Sunday at 1:00 PM ET. The Texans will try to stop a three-game losing run coming to this game after a 27-13 home loss to the Philadelphia Eagles. Houston is 1-6-1 overall and 4th in AFC South after the loss with a 1-1-1 division and 1-4-1 conference play. The Texans were scoreless in the fourth quarter of their recent loss to the Eagles. QB Davis Mills passed for 154 yards and connected two touchdowns with two interceptions on Thursday’s loss. Mills totaled 10 touchdowns on the season.

Texans starting QB Davis Mills completed 62.8% of his passes for 1,656 yards with 10 TDs, 8 picks, and 19 sacks for the season. On ground offense, RB Dameon Pierce led the running game with 678 yards on 148 carries and nailed three TDs. WR Brandin Cooks grabbed 32 passes for 354 yards and penetrated the end zone once to lead the Texans receiving squad. Safety Jonathan Owens led the defensive line with 68 total tackles and defended two passes.

The New York Giants are back home to defend against the Houston Texans after snapping a four-game winning streak with a 13-27 road loss to the Seattle Seahawks. New York dropped to 6-2 and 2nd in the NFC East with a 3-1 home record and 3-2 in conference play this season. QB David Jones failed to complete a TD and sacked on five occasions in the loss. The Giants averaged 161.5 yards per game which ranked 4th in the NFL.

New York’s QB David Jones completed 143 of his 220 attempted passes for 1,399 yards and connected 6 TDs but intercepted twice and sacked 25 times this season. RB Saquon Barkley led the ground offense with 779 yards on 163 carries and nailed 5 TDs while WR Darius Stayton caught 16 passes for 232 yards and reached the end zone once. On defense, Safety Julian Love initiated a total of 58 tackles with a sack and one interception for the season.

Houston Texans vs. New York Giants. The NFL Pick for this contest is New York -5.5. The Texans have difficulties winning games this season and it will continue on Sunday afternoon. The Giants have been a good football team featuring their solid defense and will be playing fresh coming from a day off. Houston struggled on the road while New York played their best football at home with a 3-1 record. The prediction, New York Giants will win 24-13.