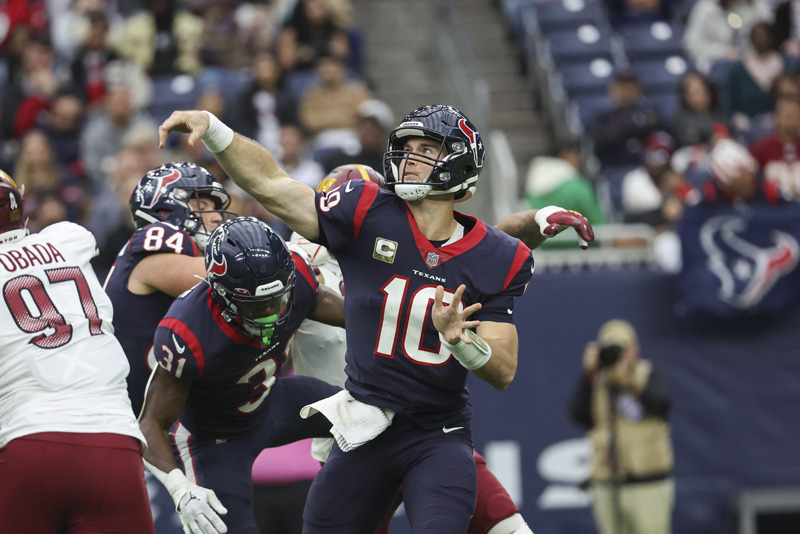 The Houston Texans and the Miami Dolphins will square off at Hard Rock Stadium in Miami, Florida on Sunday afternoon. Houston dropped to 1-8-1 following its 23-10 loss to the Washington Commanders last Sunday. The Texans are last at 1-8 in the AFC South and lost five straight matches on the season. In Sunday’s loss, Houston gave up 344 yards of total offense to Washington and was held to 148 yards of total offense while committing two turnovers, including a 37-yard pick-six by Washington in the first quarter.

The Texans are 1-9 in their last 10 outings of the season. The Houston Texans lost 4 of their last 5 road games. Davis Mills completed 61.9% of his passes for 2,144 yards, 11 touchdowns and 11 interceptions. WRs Brandin Cooks and Nico Collins combined for 863 receiving yards and 2 touchdowns while Chris Moore had 22 receptions. The Houston Texans ground game is averaging 93.7 yards per contest, and Dameon Pierce leads the way with 780 yards and 3 touchdowns. Houston’s defense is allowing 23 points and 389.6 yards per game. Jonathan Owens leads the Houston Texans with 90 tackles, Jerry Hughes has 8 sacks and Jalen Pitre has 2 interceptions.

At “ The Sunshine State “, The Miami Dolphins are 7-3, first in the AFC East Division, and tied with the Buffalo Bills. Miami enjoyed a bye in Week 11 and defeated the Cleveland Browns 39-17 in Week 10. In the victory over Cleveland, Miami gained 491 yards of total offense and held Cleveland to 297 yards of total offense. Miami QB Tua Tagovailoa passed for 285 yards with three touchdowns. Miami has won each of its last four.

The Dolphins are 7-3 in their last 10 matches of the season. Miami won 4 of their last 5 home games. Tua Tagovailoa completed 71% of his passes for 2,265 yards, 18 touchdowns and 3 interceptions. WRs Tyreek Hill and Jaylen Waddle combined for 2,026 receiving yards and 10 touchdowns, while Mike Gesicki has 24 receptions. The Dolphins’ ground game is averaging 97.7 yards per contest and Raheem Mostert leads the way with 543 yards and 3 touchdowns. Miami’s defense is allowing 24.1 points and 356.7 yards per game. Elandon Roberts leads the Miami Dolphins with 62 tackles, Melvin Ingram has 4 sacks and Jevon Holland has 2 interceptions.

Houston Texans vs Miami Dolphins. The NFL pick for this game is the Miami Dolphins. The Dolphins will win its fifth game in a row with a victory at home on Sunday over the Texans; the play here is UNDER. The UNDER stayed in four of Miami’s last five at home as well as in nine of the last 12 that Houston played on the road. Houston is 30th in the NFL in scoring with an average of 15.9 points per game and the Texans have scored an average of only 13.2 points per game over the last four games. Prediction: The Miami Dolphins will win but the best to play here is the UNDER predicted at 27-14.