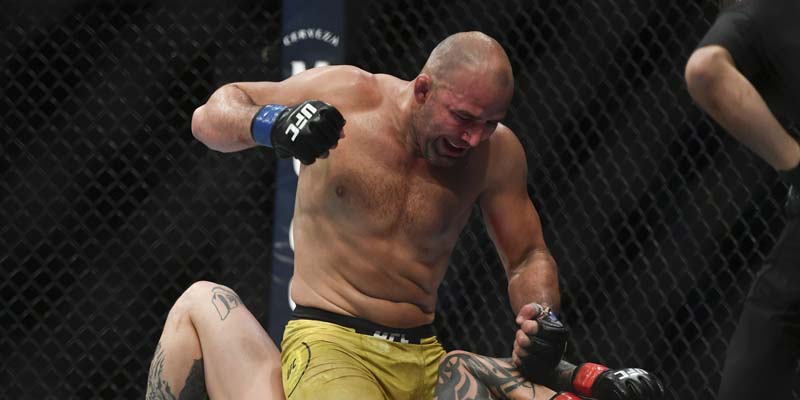 Glover Teixeira comes into this bout on the back of a defeat to Jiri Prochazka. This was a tough defeat for Glover, who lost his title to the Czech fighter, despite getting the better of Prochazka up to the point of defeat.

Hill, on the other hand, comes into the bout on a three-fight win streak, having last knocked out Thiago Santos. In terms of physical attributes, Hill has the upper hand. Teixeira stands at 6’2”, has a 76” punch reach, and a 42.5” leg reach. Hill stands at 6’4”, with a 79” punch reach, and a 43.5” leg reach. Moreover, Hill fights in a southpaw stance, while Glover fights in an orthodox stance. Thus, all the physical attributes lie in favor of the American. However, the stats show a different picture. Although Hill throws more punches than Teixeira, the Brazilian is more accurate with 60% of his punches landing compared to Hill’s 55%. In addition, Teixeira has much better takedown numbers, whereas Hill has virtually no grappling skills. Therefore, the bout will definitely be a fight between two very different styles. Glover Teixeira will look to use his grappling to his advantage, while Hill will want to keep his distance.

Our prediction is that Jamahall Hill will defeat Glover Teixeira by TKO in the fourth round to become the new UFC undisputed champion. The odds for the fight are in Hill’s favor, with Hill being a -125 favorite and Teixeira being a +105 underdog as per the UFC’s official odds. However, Teixeira has a history of defying the odds, so it would be wise not to count him out. The fight is expected to be close, with both fighters having their own unique styles and strengths.

UFC 282: How much money can Glover Teixeira and Jamahal Hill expect to make in this battle?

For his final match at UFC 275 against Ji Procházka, Glover Teixeira reportedly made $500,000, according to reports. His total earnings, which include $42k from his deal, totaled $542k. Thus, he will undoubtedly make more than $540,000 if we take into account the sum from his most recent bout.

Whereas Jamahal Hill allegedly received a base salary of $110,000 and an additional $10,000 in sponsorship, however, this is unconfirmed. Consequently, the overall compensation was $110,000. So, he will undoubtedly win more than $100,000 considering this match. According to Total Reporter, Teixeira’s base salary is anticipated to be 500,000 dollars, while Hill’s base pay is anticipated to be 200,000 dollars. On top of that, Teixeira and Hill will each receive a PPV payout of $300k and $100k. In conclusion, Teixeira may receive $800k and Hill might earn $300k. This bout will showcase the clash of two very different fighting styles and it will be interesting to see who takes the vacant title.

Glover Teixeira vs Jamahal Hill: Our prediction: Jamahall Hill beats Glover Teixeira by TKO in the fourth round to become the new UFC undisputed champion.