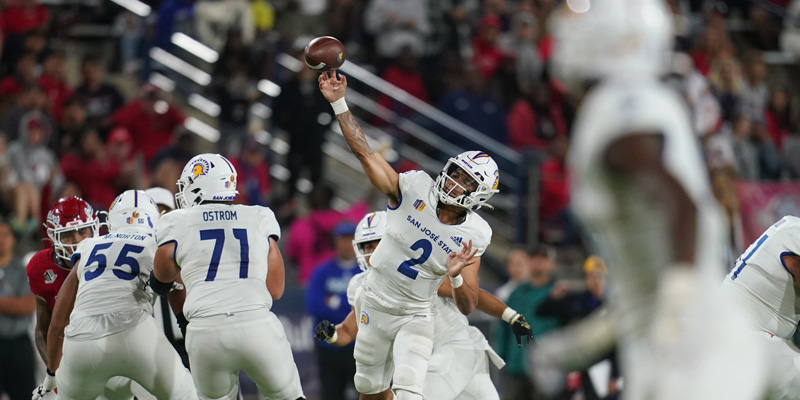 This Bowl clash is between the MAC and a program from the Mountain West Conference. The Eastern Michigan Eagles will take on the San Jose State Spartans in the Famous Idaho Potato Bowl on the blue turf in Boise, Idaho Tuesday afternoon. The Eagles capped their regular season 8-4 after beating Central Michigan 38-19 at home last November 25 as a 1.5-point underdog. These protagonists met just once as FBS programs with Eastern Michigan winning a 30-27 close-quarter battle in the California Bowl last December 12, 1987.

The Eastern Michigan Eagles will be in this one on behalf of the MAC after qualifying for this bowl this season. QB Taylor Powell threw for 1.813 yards, 14 touchdowns, and 7 picks on 65.3% passing. RB Samson Evans leads the Eagles in rushing with 1,084 yards and 13 TDs this season. WR Tanner Knue leads EMU’s receiving corps with 42 catches for 592 yards and 9 TDs while Darius Lassiter has 363 receiving yards. WRs Hassan Beydoun and Dylan Drummond each have 400+ receiving yards as well. Three other EMU receivers have 100+ receiving yards on the year. Chase Kline has a team-high 87 total tackles to lead the Eagles’ defense this season. Jose Ramirez has a team-high 12 sacks for EMU on the year.

The San Jose State Spartans capped at 7-4 in the regular season after bashing the Hawaii Rainbow Warriors 27-14 at home in their finale clash on November 26. The Spartans failed to cover as a 16-point favorite in the encounter. The Spartans are 33rd in the nation in passing offense with 263.9 yards per game and 125th in rushing offense with an average of 92.5 yards per contest on the season. San Jose State is 73rd in the FBS in scoring offense with an average of 27.5 ppg while they are 24th in scoring defense by allowing an average of 20.3 points per contest. QB Chevan Cordeiro is 233 of 382 passing for 2,884 yards with 20 touchdowns and four picks on the year. Cordeiro is second on the team with 215 rushing yards plus eight scores.

Eastern Michigan Eagles vs San José State Spartans. The NCAAF pick is the San José State Spartans. Eastern Michigan was middle of the road in offensive production and struggled at times defensively this season. Eastern Michigan’s success comes from Evans on the ground but San Jose State controlled rivals to 122.6 yards per game and 3.3 yards per carry in the run game on the season. The Spartans will adjust through the air because they know they can’t run the ball. San Jose State is the better team on the defensive side of the ball predicted to win 28-24.