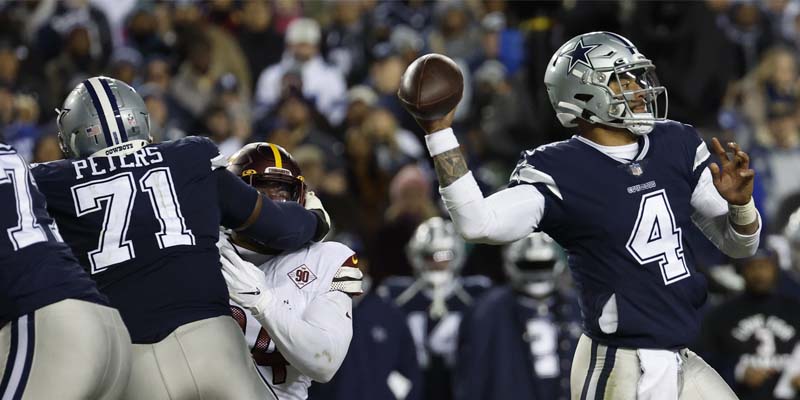 The Dallas Cowboys will play the Tampa Bay Buccaneers in the NFC Wild Card Playoffs at Raymond James Stadium in Florida on Monday, January 16th, 2023 at 8:15 PM ET. Despite a strong 12-5 regular season record, the Cowboys will enter the game as the fifth seed in the NFC after a disappointing performance against Washington in their last game. They were trailing 13-0 in the second quarter and only managed to score a touchdown with six seconds remaining in the first half, ultimately being shut out in the second half by the Commanders’ defense.

The Dallas Cowboys are a formidable force heading into the NFC Wild Card Playoffs. They are 14th in the league for passing offense, averaging 219.8 yards per game, and 9th in rushing offense with 135.2 yards per game. They boast a high-powered offense, ranking 4th in the league in scoring with 27.5 points per game and their defense is also strong, ranking 5th in the league with an average of 20.1 points allowed per game. Led by quarterback Dak Prescott, who has thrown for 2,860 yards, 23 touchdowns, and 15 interceptions, the Cowboys’ offense is a force to be reckoned with. With a solid backup quarterback in Cooper Rush, who has thrown for 1,051 yards, five touchdowns, and three interceptions, the Cowboys are well-equipped to face off against the Tampa Bay Buccaneers in the NFC Wild Card playoffs.

The Tampa Bay Buccaneers were facing challenges on their offensive line and had a losing record of 8-9. But the Buccaneers managed to clinch the NFC South division and secure home-field advantage for the Wild Card playoffs game against the Dallas Cowboys. Despite a subpar performance in their final regular-season game with the Atlanta Falcons, where they liberally substituted players and ultimately lost the game, the Buccaneers are determined to make the most of their home-field advantage. The team and their fans are eager to see how they will fare against the Cowboys in the Wild Card playoffs.

Tampa Bay is a team that relies heavily on its passing offense. They rank 2nd in the league with an average of 269.8 yards per game through the air. However, their rushing offense is not as strong, ranking 32nd in the league with 76.9 yards per game on the ground. Their offense as a whole is not as potent as they rank 25th in the league in scoring with an average of 18.4 points per game. But they have a solid defense that ranks 13th in the league by allowing 21.1 points per game. Their quarterback, Tom Brady, has had a solid season, completing 490 of 733 passes for 4,694 yards with 25 touchdowns and 9 interceptions. Blaine Gabbert and Kyle Trask are next in line for quarterback duties. Leonard Fournette leads the team’s ground game with 189 carries for 668 yards and a score.

Dallas Cowboys vs Tampa Bay Buccaneers. The NFL Pick for this contest is the New Orleans Saints. The Tampa Bay Buccaneers made it this far due to their division slate. Despite the struggles in the final game of the season, Dallas is the better team in this matchup. Dallas will dominate both sides of the ball as the Cowboys are better in every aspect of this game. Dallas will do enough on the road Monday night to get the wild card win and advance to the next round. Prediction: Dallas Cowboys win and cover 27-13.