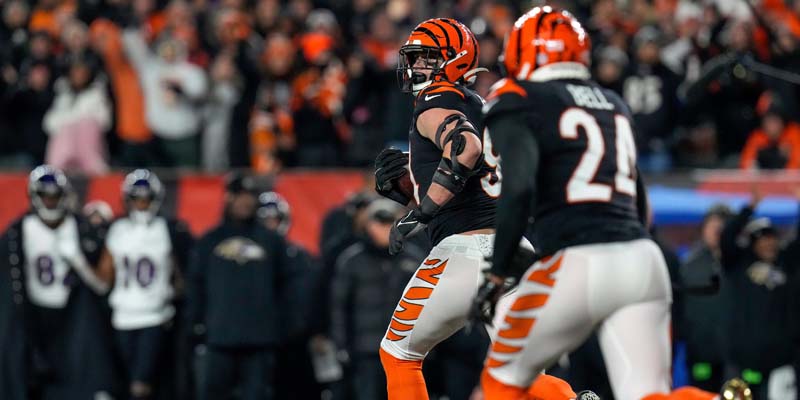 The Cincinnati Bengals will take their claws to Highmark Stadium in Orchard Park, New York on Sunday to contend with the Buffalo Bills in the AFC Divisional round of the playoffs. The Bengals had a rough time in the Wild Card round, as they clawed their way to victory against the Baltimore Ravens with a final score of 24-17. The team is on a 9-game  winning run and is on fire, ending the regular season with an average of 26.1 points scored and 20.1 points allowed per game. Bengals quarterback Joe Burrow threw 209 yards and a TD while RB Joe Mixon sprinted for 39 yards. Wide receiver Ja’Marr Chase grabbed 9 passes for 84 yards and a touchdown. LB Logan Wilson tackled his way to a team-high 10 tackles. The Bengals’ defense also had a strong showing with two quarterback sacks and one interception in the opening round of the postseason.

The Buffalo Bills advanced to the postseason by winning 34-31 over the visiting Miami Dolphins in the Wild Card round after an 8-game winning run. As the winners of the AFC East Division during the regular season, Buffalo had an average of 28.4 points and allowed 17.9 points per game; both categories are second-best in the NFL. The Bills also have a good record at home against the Bengals, with 8 wins out of 9 games. They are currently 4.5-point favorites or -210 on the Moneyline, but it’s worth noting that the Bengals have a good record when they are underdogs, with 8 wins out of 8 games. The total for the game is set at 50.5, and the last three head-to-head games have gone under this total.

Cincinnati Bengals vs Buffalo Bills. The NFL pick for this game is the Cincinnati Bengals. Cincinnati’s pass protection lost Left Tackle Jonah Williamson a dislocated kneecap and is listed as week to week, but it’s doubtful if he can play in this one. But the Bengals’ defense will keep the score within reach to cover. Cincinnati has covered the number in 12 of the last 16 versus an opponent with a winning record, while Buffalo has struggled at home to cover, failing to cover the nut in five of the last seven at home. Prediction: Buffalo Bills win but fall short ATS 28-24.