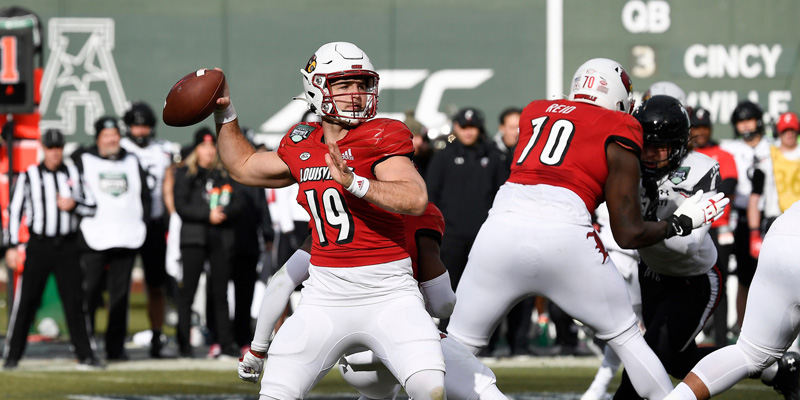 The Wasabi Fenway Bowl between the Cincinnati Bearcats and the Louisville Cardinals will be at Fenway Park in Boston, MA on Saturday at 11:00 AM (EDT). Coach Satterfield is taking over for the Bearcats, but he will not be involved in coaching against his former team on Saturday. Cornerbacks and special teams Kerry Coombs is the interim coach for this Bowl matchup; he is trying to help Cincinnati win 10-plus games for the fourth time in the last five seasons. Several assistant coaches, including defensive coordinator Mike Tressel, who is following Fickell to Wisconsin, are absent. The Bearcats had some players opt out of this game as well, including wide receiver Tre Tucker and tight end Josh Whyle.

Quarterback Ben Bryant led Cincinnati’s offense, but was injured late in the year to end his season. Sophomore Evan Prater took over the signal-caller assignment; he completed 53.8% of his passes for 340 yards and a pick. Senior RB Charles McClelland leads the rushing attack with 140 carries for 834 yards and seven touchdowns, averaging 6.0 yards per carry. Tucker was the team’s second-leading WR and Why was the team’s fourth-leading target in the passing game.

Meanwhile, the Louisville Cardinals head coach Scott Satterfield left the program to take over at Cincinnati following Luke Fickell’s departure, which is intriguing playing against his former team. Director of player development Deion Branch, who was a former Cardinals star and NFL receiver, was named Louisville’s interim coach for this contest. The Cardinals got Jeff Brohm away from the Purdue Boilermakers, but he will not be involved this week. The team will miss star quarterback Malik Cunningham, who opted out of the game to prepare for the NFL Draft.

The Cardinals have lost 4 of their last 6 road matches. Malik Cunningham completed 62.4% of his passes for 1,568 yards, 8 touchdowns and 5 picks. WRs Tyler Hudson and Marshon Ford combined for 1,455 receiving yards and 4 touchdowns while Ahmari Huggins-Bruce has 30 receptions. Louisville’s ground game averages 193.8 yards per match and Jawhar Jordan leads the way with 700 yards and 2 touchdowns. Louisville’s defense is allowing 20.2 points and 347.6 yards per game. Momo Sanogo leads the Louisville Cardinals with 86 tackles, Yasir Abdullah has 8 sacks and Quincy Riley has 3 interceptions.