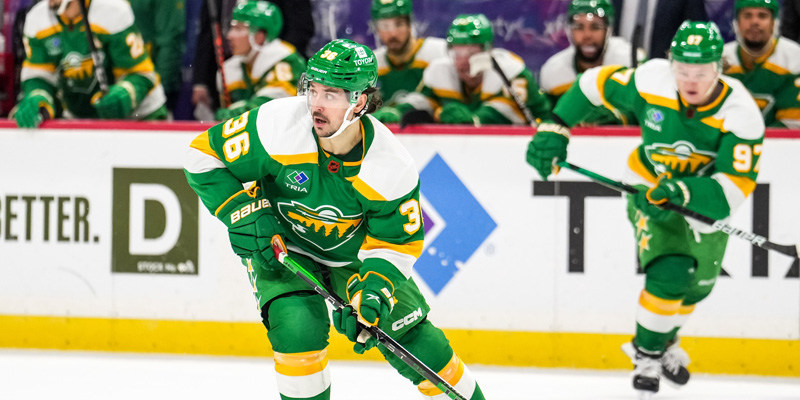 The Xcel Energy Center in Saint Paul will be hosting this Friday’s NHL schedule when the Chicago Blackhawks meet the Minnesota Wild in the Central Division competition. Chicago is 7-16-4 and placed last in the Central Division with a 3-7-2 road record for the season. The Blackhawks won just one regulation game through the last 10 matches played and placed 31st in the National Hockey League this year. Chicago struggled after losing five matches in a row including their recent 1-4 home loss to Vegas on Thursday evening. The Blackhawks have 25 shot attempts with 23 hits and won 25 faceoffs while their penalty minutes sit at 2.

Chicago was held scoreless in the first two periods of the match until Right-Wingman Taylor Raddysh hit the only goal scored for the Blackhawks on assists from Center Jonathan Toews and Defenseman Seth Jones in the loss. Chicago’s defense gave up one power-play goal and an empty net shot that converted into a goal for Vegas.

The Chicago Blackhawks will be missing Goaltender Alex Stalock at the net after he was put on injured reserve status on November 7 due to a concussion.

The Minnesota Wild will be staying on their home ice and look to extend their winning streak by hosting the Chicago Blackhawks in the Central Division rivalry match on Friday night. Minnesota is 16-11-2 on 34 points and placed third place in the Central Division with a 9-6-1 home record this season. The Wild is victorious in their last three matches including a home victory over the Detroit Red Wings at 4-1 while holding their opponents to just an average of 2.93 per outing. LW Kirill Kaprozov led Minnesota with 36 points while RW Mats Zuccarello is the top setter for the Wild with 20 assists on the year. In beating the Red Wings, the Wild held Detroit to only 17 shots on goal leading to their 4-1 home triumph.

Center Frederick Gaudreau punched the first goal for Minnesota with a power-play shot and added another goal to seal their victory with a long empty-net shot on an assist from LW Marcus Foligno.  Defenseman Matt Dumba (from Jordan Greenway/Joel Eriksson) and RW Mats Zuccarello (from Kirill Kaprizov) chipped in one goal each in the winning effort for the Wild.

Minnesota right-wingmen Ryan Hartman (injury reserve) and Brandon Duhaime (out indefinitely) due to an upper-body injury. However, Hartman is probable to play in Friday evening’s match versus the Blackhawks.

Chicago Blackhawks vs Minnesota Wild. The NHL Pick for this contest is Minnesota -320. The Wild won only six of their last 10 outings played at home but RW Ryan Hartman is probable to play in this game and that makes a big difference. Moreover, the Blackhawks are playing on the road with a 3-7-2 record and struggled after losing their last five contests played this season. Prediction: The Minnesota Wild will win 4-3.