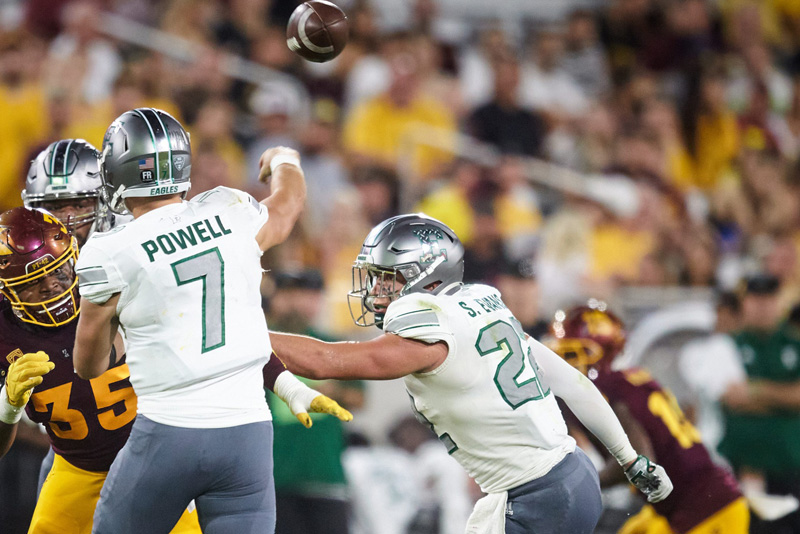 QB Daniel Richardson is converting 56.3 percent of his passes for 1,988 yards, 15 touchdowns, and 5 interceptions. WR Jalen McGaughy has 18 receptions, while Carlos Carriere and Joel Wilson collaborated for 954 receiving yards and 8 touchdowns. RB Lew Nicholls III, who has 596 yards and six touchdowns, is the team’s top rusher for the Chippewas, who average 159 yards on the ground per game. Central Michigan’s defense is giving up 27.3 points and 369.7 yards per game. Thomas Incoom has 10.5 sacks, Trey Jones has 2 interceptions, and Kyle Moretti has 83 tackles to lead the Central Michigan Chippewas in that category.

QB Taylor Powell is throwing for 1,547 yards, 11 touchdowns, and 7 interceptions on a 65 percent completion rate. WRs Darius Lassiter had 26 receptions, while Tanner Knue and Hassan Beydoun collaborated for 964 receiving yards and 12 touchdowns. Samson Evans, who has 949 yards and 12 touchdowns, is the team’s top rusher for the Eastern Michigan Eagles, who average 141.2 yards per game on the ground. Eastern Michigan’s defense allows 379 yards and 29.5 points per game. Jose Ramirez has nine sacks, Blake Bogan one interception, and Chase Kline tops the Eastern Michigan Eagles with 79 tackles.