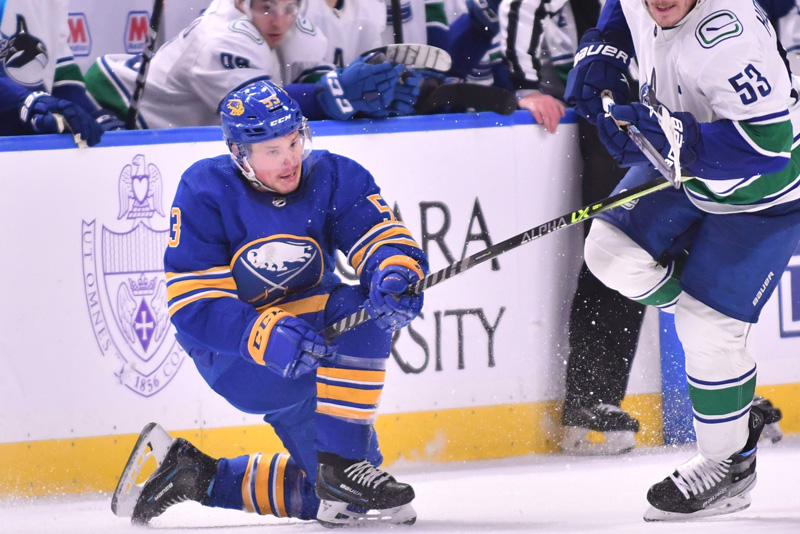 The Buffalo Sabres are back on the road going to Canadian Tire Center in Ottawa against the Ottawa Senators on Wednesday, November 16. The Sabres come into this match-up riding on a six-game losing slump following their recent 4-5 home loss to the Vancouver Canucks on Tuesday. Buffalo dropped to 7th place at 7-8-0 on 14 points in the Atlantic Division with a 3-3-0 record away from home this season. The Sabres trailed by a 3-5 deficit after two periods and came short in scoring only one goal to bring the game into overtime at 5-all. LW Jeff Skinner led Buffalo with two goals scored on assists from Defenseman Rasmus Dahlin (1), RW Tage Thompson (1), and RW Alex Tuch (2) in the match.

The Sabres’ offense is led by RW Tage Thompson with a team-leading 11 goals and 19 points to go along with 8 assists on the season while Defenseman Rasmus Dahlin led in assists with 10 on 17 points and added 7 goals for Buffalo. Four more skaters of the Sabres are on double-figure scoring while the Buffalo Sabres as a team acquired a total of 55 goals scored, 93 assists, and 148 points through 15 matches played. The team has 14 power-play goals and 26 power-play assists for the year.

The totals went OVER in 7 of the Sabres’ last 9 outings. Buffalo is 0-6 SU in its last 6 games played. The Buffalo Sabres are 2-5 SU in their last 7 contests versus Ottawa and 1-5 SU in their last 6 matches on the road against the Senators.

The Ottawa Senators stayed at their home ice to bounce back from their recent loss by winning over the Buffalo Sabres in another NHL Inter-Division face-off on Wednesday. The Senators lost their recent duel with the New York Islanders at 2-4 at home on November 14 following their 4-1 victory over the Philadelphia Flyers that snapped a seven-game losing streak on Saturday. Ottawa placed last at 5-9-1 on 11 points in the Atlantic Division with a 4-5-0 home record on the season. The Senators struggled in this match-up after being held scoreless in the opening period and scored just one goal in each of the last two periods. RW Drake Batherson and Center Claude Giroux scored one goal apiece for Ottawa in the loss.

LW Brady Tkachuk led the Senators with a team-high 20 points and Tkachuk is the team’s top set-up man with 14 assists on the season. Centers Claude Giroux and Shane Pinto led Ottawa in goal scoring with 8 while Giroux chipped in 9 assists on 17 points and Pinto with 9 points for the year. The Ottawa Senators recorded a total of 51 goals, 82 assists, and 133 points through 15 games played with 13 power-play goals and 24 power-play assists for the season.

The Ottawa Senators are 1-8 SU in their last 9 matches. The totals went UNDER in 4 of the Senators’ last 5 outings versus Buffalo. Ottawa is 0-5 SU in its last 5 home games and 5-1 SU in its last 6 contests at home against the Sabres.

Buffalo Sabres vs. Ottawa Senators. The NHL Pick for this contest is the Ottawa Senators. These teams are in the middle of the pack in expected goals and bottom third in goals allowed in the NHL. However, the Senators will be playing on their home ice with a 4-5-0 against the undermanned team of the Sabres who will be missing RW Jack Quinn (upper body) with an injury in their match versus Boston, Saturday. Prediction: Ottawa Senators will win 5-3.