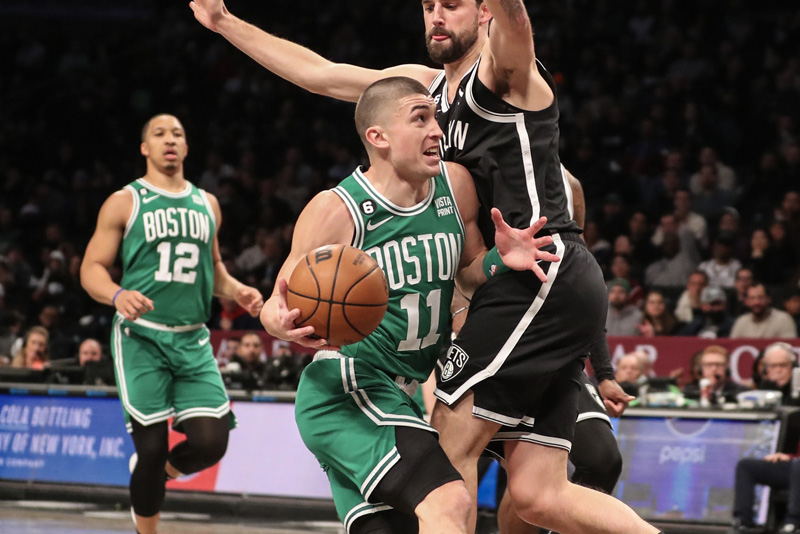 The Boston Celtics will cross North of the border to face off with the Raptors at Scotiabank Arena in Toronto, Canada on Monday evening. This will be the second road game of six for Boston. The Celtics recently clobbered the Nets 103-92 at Barclays Center in Brooklyn, Sunday. Boston had a 12-point lead over the Nets at the half. Brooklyn tried to get closer but was held off. Boston is the top team at 19-5 in the Eastern Conference and leads the Atlantic Division.

The Celtics have SG Jaylen Brown deliver 34 points on 10-for-20 shooting with ten rebounds, and four blocks. All-Star SF Jayson Tatum followed with 29 points and 11 boards for the Celtics. The team limited the Brooklyn Nets to only 41% from the field. Tatum and Brown deliver career-highs in scoring. Acquired PG Malcolm Brogdon blended well with his new team. Brown became the 7th player in Celtics history to bring in at least 37 points, 14 boards, and five dimes in a game. The others were Larry Bird, Dave Cowens, John Havlicek, Paul Pierce, Bill Russell, and Antoine Walker.

Meanwhile, the Toronto Raptors enter this game at 12-11 and are more rested than the Celtics with a day off in between games. Toronto recently routed the visiting Orlando Magic 121-108, Saturday. SF O.G. Aunoby matched his 32 season-high-points. PF Pascal Siakam earned a double-double of 26 points and 10 rebounds. SF Scottie Barnes also collected a double-double with 17 points and a season-high 14 rebounds in the win. Toronto is 7th at 12-11 in the Eastern Conference and third in the Atlantic Division.

Toronto is just 3-9 on the road and has lost to mediocre teams like the Detroit Pistons and San Antonio Spurs. But the Raptors are on a different level when playing at home; they are 9-2 and slashed some tougher teams like the Cleveland Cavaliers and Atlanta Hawks. Anunoby is their leading point maker with 19.3 ppg, 48.4% in FG shooting, and 82.8% from the free-throw spot.

Boston Celtics vs Toronto Raptors. The NBA pick for this game is the Toronto Raptors. Boston PG Marcus Smart (left hip contusion) did not play last night and is not sure to play in this match-up. The Raptors have what it takes to take the Celtics’ skilled players blow-by-blow. Take Toronto to win at home. Prediction: The Toronto Raptors win 117-110.