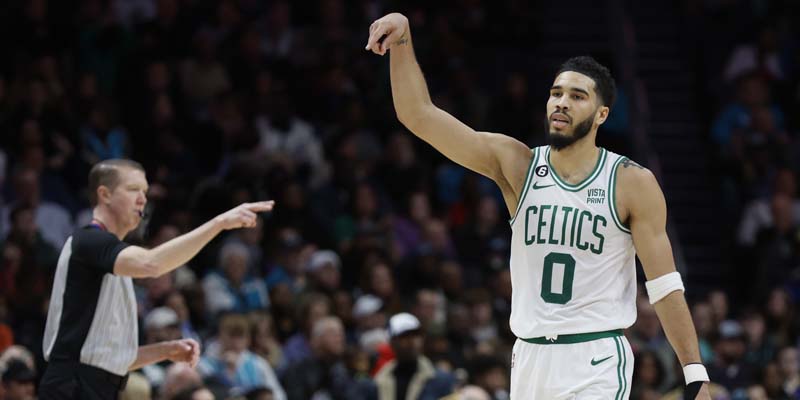 The Boston Celtics will play their first game of 5 straight road matches with the Hornets at Spectrum Center in Charlotte, NC on Monday evening. The Celtics (32-12) are riding a six-game winning streak and lead the league in offensive efficiency for interim head coach Joe Mazzulla. On Saturday, Boston outscored Charlotte by 14 points during the third quarter to pull away for a 122-106 victory and remain the top team in the league.

The Celtics won 10 of their last 12 games heading into this rematch with Charlotte. Boston made it six straight wins on Saturday night with a come-from-behind 122-106 win at Spectrum Center. Boston trailed by four at the half and fell behind by as many as 16 points before taking control of the game. The Celtics were without two starters in the win as Jaylen Brown remained out with an abductor issue and Derrick White after he left the game in the first five minutes with a neck injury. Jayson Tatum continued his MVP push with 33 points, including 17 in the third quarter as the Celtics seized control. Malcolm Brogdon added 30 points as he provided much-needed offense without Brown and White in the lineup. Boston drilled 19 3-point field goals in the victory.

At “ The Queen City ”, The Charlotte Hornets dropped 15 of their first 20 home games and own the worst overall record in the Eastern Conference. In Saturday’s home loss, Charlotte led by as many as 16 points in the first half and went to the break holding a 56-52 lead. The Hornets (11-33) outscored the Celtics 60-48 in the paint but missed 19 of 27 from the three-point line. Charlotte is at the bottom of the Eastern Conference with a win/loss tally of 11-33.

The Hornets showed promise at the onset of this competition but with the injury-plagued roster at bay, Charlotte now has the second-worst record in the NBA following Saturday night’s defeat. In the loss, the Hornets were led by Ball and his 31 points, nine assists, and seven rebounds. SG Terry Rozier chipped in with 21 points as the Hornets fell for the seventh time in eight games. The Hornets’ bench was outscored 45-22 by the Celtics’ bench in the defeat.

Boston Celtics vs Charlotte Hornets. The NBA pick for this game is the Boston Celtics. Boston SF Jaylen Brown is suffering a left adductor tightness and is scheduled to be re-evaluated this week. The Celtics lean on their offense against inferior opponents and the Hornets will be walking the wire. Take the over to cash in the rematch. Prediction, Boston Celtics win 124-116.