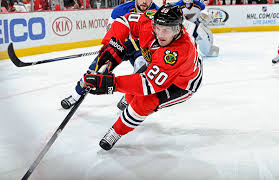 Saturday’s NHL Stanley Cup Finals game was something that Chicago fans have been waiting a long time for, as the Blackhawks beat the Tampa Bay Lightning 2-1, bringing the series to 3-2 for Chicago. Monday night the game moves to Chicago, and it will be their first time to try to win the Cup at in home since 1938, and the essential software of bookmakers will be put to the test.

These two teams are making this all about defense, so at no point in the past five games has either team been ahead by more than one point. In fact, Saturday’s game was tied 1-1 until a surprise goal from Antoine Vermette sealed the Blackhawks fate as they held tight onto the lead.

“You know going into games that it’s going to be a battle,” Chicago defenceman Niklas Hjalmarsson said. “For three periods, every single shift, you have to give it your all, otherwise you’ll be out there for a goal against. That’s just how good they are. You know what you’re playing for.”

At the close of Game 5, the Blackhawks captain Jonathan Toews said “We were checking well, and we were creating those chances off the fact that they have to make plays and the fact that they have to really push the envelope offensively to try to even things up. In a lot of ways, that was our best defensive game, late in the game especially, and it’s still something we can build off of and improve going into the next one, get excited that we can protect leads the way we did tonight.”

Monday night the Blackhawks host the Lightning in what is sure to be a memorable game for the essential software of bookmakers, especially if Chicago can bring home the Cup.

The Chicago Blackhawks last won the Stanley Cup in the 2012-2013 season, the Cup’s 120th appearance. Due to a lock out over salaries and percentages, the Finals didn’t start until June 12th and finished on the 24th.