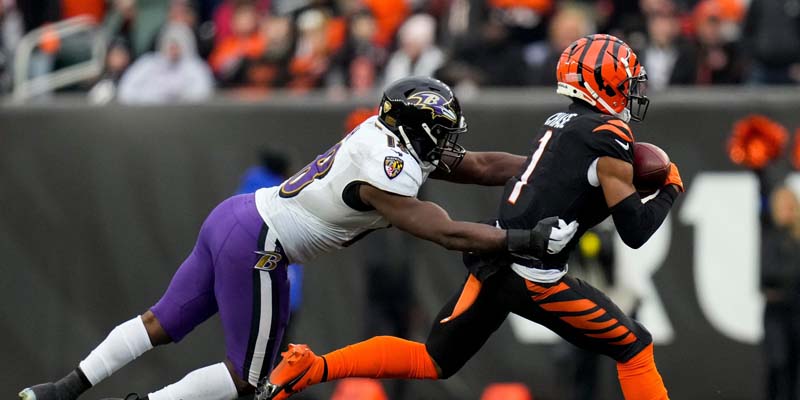 The Baltimore Ravens, decked out in purple, will travel to Paycor Stadium in Cincinnati, Ohio on Sunday to face off against the orange-clad Cincinnati Bengals in an AFC wildcard game. The Ravens ended the regular season with a record of 10-7, placing second in the AFC North behind the Bengals. In their previous matchup, the Bengals emerged victorious with a score of 27-16, however, the Ravens were without their quarterback Lamar Jackson who may or may not play in Sunday’s wild-card game.

The Cincinnati Bengals fiercely battled their way to a 12-4 record, securing a victory against the Baltimore Ravens in the final game of the regular season this past Sunday. Their winning streak continued as they claimed victory in each of their final eight games. The Bengals’ aggressive playstyle was evident in their statistics, finishing the regular season with an impressive average of 26.1 points per game, ranking them 7th in the NFL, while their defense also held strong, allowing an average of 20.1 points per game, placing them 6th in the league.

The Bengals won 6 home games in a row. QB Joe Burrow completed 68.3%t of his passes for 4,475 yards, 35 touchdowns, and 12 picks. Ja’Marr Chase and Tee Higgins totaled 2,075 receiving yards and 16 TDs while Tyler Boyd had 58 receptions. Cincinnati’s ground game is averaging 98.2 yards per contest and Joe Mixon leads with 814 yards and 7 touchdowns. Defensively, Cincinnati allows 20.4 points and 332.3 yards per game. Logan Wilson leads the team with 123 tackles, Trey Hendrickson has 8 sacks and Vonn Bell has 4 interceptions.