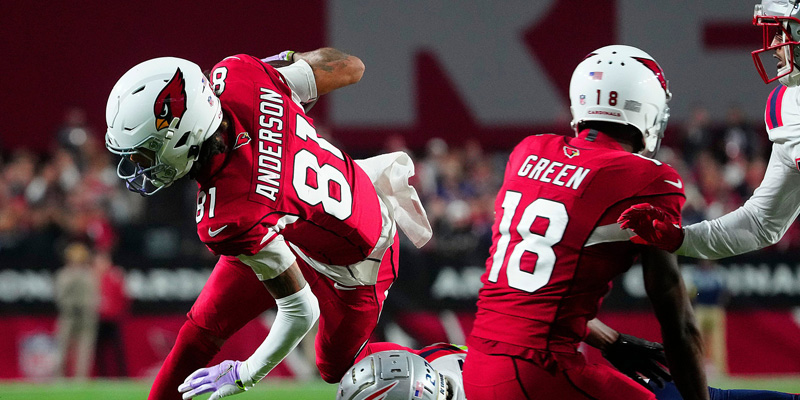 The Arizona Cardinals will meet with the Denver Broncos in NFL action at Empower Field in Mile High, CO, on Sunday, December 18, 2022, at 4:05 PM ET. The Cardinals will look to Colt McCoy, a seasoned veteran, to guide them the rest of the way without Murray, beginning Sunday at Denver. The 36-year-old quarterback has 12 NFL seasons of experience, a 62.6 completion percentage, 34 touchdown passes, and 31 interceptions. Earlier in the season, he replaced Murray three times, with one victory and two defeats. McCoy will be responsible for leading an Arizona attack that ranks 20th overall in total yards (333.8) and 17th in points scored per game (21.3). When under pressure, he can count on Marquise Brown (565 receiving yards and 3 TDs) and DeAndre Hopkins (653 receiving yards and 3 TDs) to win the majority of his jump balls. The ineffective Cardinals rushing offense, which ranks 17th in average rushing yards per game, is led by running back James Conner (561 rushing yards and 5 touchdowns).

With Super Bowl expectations, the Broncos, who finished the 2022–23 NFL season with a 3–10 record, are likely the greatest losers. This club may have some shortcomings, but they are unquestionably more talented than their record shows. Denver is struggling with difficult conditions in one way or another. The future of the team rests in the hands of quarterback Russell Wilson, 34, who has a 37.2 QBR. As a legendary member of the Seattle Seahawks, Wilson demanded a five-year, $242 million deal as well as a ton of draft selections (two in each of the first, second, and fifth rounds), three players, and other assets in exchange for his services. The deal will end up being one of the most unfair moves in league history if there isn’t a dramatic improvement in form.

The Broncos must nevertheless advance. They won’t this week since Wilson is sidelined with a concussion. The Broncos’ offense, which is expected to average 315.5 total yards per game and score 14.9 points, will be led by Brett Rypien, who will start for Denver. The passing offense averages 212.4 yards, and the ground attack averages 103.2 yards (25th in the NFL) (22nd). When retreating to pass, Rypien will rely on Jerry Jeudy (587 receiving yards, 6 touchdowns), since leading receiver Courtland Sutton will be out with a hamstring injury. Denver ranks 30th overall for red zone TD conversion percentage (44.4%) and dead bottom on third-down conversion percentage (28.1%).

Arizona Cardinals vs Denver Broncos. The NFL pick for this game is the Denver Broncos. In a matchup of backup quarterbacks, Rypien and Denver have the advantage at home in terms of the spread. The excellent defense of the Broncos, which only surrendered 19 touchdowns while forcing 16 turnovers, will help the 26-year-old Boise State product. Conner could struggle on the ground against a Broncos defense that kept its opponent under 100 running yards in six of their 13 games, so Denver will put a lot of on McCoy to perform. The Cardinals only averaged 16.7 points per game in the 3 matches that McCoy started so far this year. The Denver Broncos will win to a predicted score of 21-17.