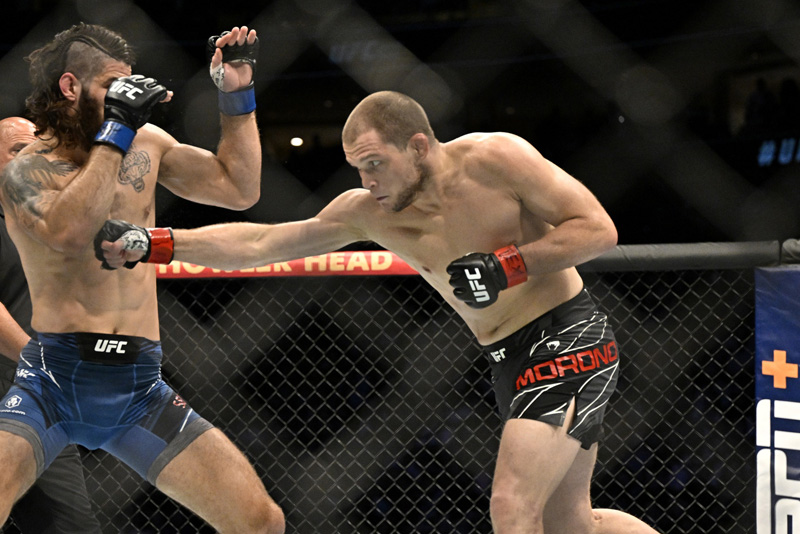 Alex Morono and Santiago Ponzinibbio will face off on Saturday in UFC 282 at the T-Mobile Arena in Paradise, Nevada on December 10, 2022, at 11:00 pm EDT. Morono enters this fight with a 22-7 record and has won 41 percent of his fights by decision. The match is for three rounds in the welterweight division as a featured undercard attraction on the UFC 282 card from T-Mobile Arena in Paradise, Las Vegas.

Morono has won his last four straight matches with his last fight winning over Matthew Semelsberger in July this year. Winning this bout in less than a week’s notice will do wonders for the refined fighter.

“The Great White” lands 5.36 significant strikes per minute at 43% hitting accuracy; he seldom takes the fight to the ground. Morono has 15 finishes over his 22 victories averaging 11:37 of fight duration; he increased his offensive output since falling apart late to Pettis in 2020. From then on,, he’s 321-242 outstriking his foes.

Morono is a balanced fighter whose submission game and knockout power is lethal to his opponents. and he’s a black belt in BJJ and Taekwondo. At 32 years old, Morono’s cardio allows him to be effective in each round and has never been submitted in his career. This will be Morono’s seventh career fight in Nevada.

Meanwhile, Santiago Ponzinibbio enters this fight with a 28-6 record winning 54 percent of his fights by knockout. Although Ponzinibbio is on the wrong side of 30, he has the advantage of fighting an opponent with less than a week’s notice in this bout.

Ponzinibbio was expecting Robbie Lawler in this scheduled clash; Lawler will have to wait for his time with Morono on his lap for the fight. Santiago looks like a shell of his former self, UFC odds favor Ponzinibbio at a slight -180 favorite. Morono is an improved opponent and an attractive underdog at +155.

An illness kept Ponzinibbio out of his peak and he returned to a shadow of his former self. After the bout with a staph infection, he lost three of his last four duels since resuming his career. The Argentinian fighter went from being a fight away from a world title shot to show up at the Last Stop of the Staton. His performance against Morono ultimately will be a better indicator of where he is at this stage of his career when the smoke clears.

“The Argentine Dagger” lands 5.00 significant strikes per minute at 41% accuracy and keeps the fight going with a respectable 60% takedown rate. Ponzinibbio has 21 finishes in his 28 wins, with an average 10:46 duration. Santiago also benefits from having a complete training camp and will have slight advantages in both heights and reach over Morono.