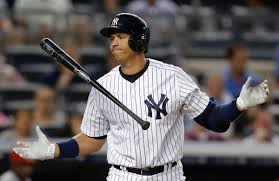 New York Yankees officials have gone on record saying, they will not pay Alex Rodriguez a $6 million bonus for hitting his 660th home run. “We have the right but not the obligation to do something, and that’s it,” said Yankees general manager Brian Cashman stated before Saturday’s Yankees, Red Sox game at Fenway Park. “We’re going to follow the contract as we follow all contracts, so there is no dispute, from our perspective.”

Sportsbook Software and Price per head services had placed the odds of over under 14.5 home runs. He easily breaks that barring injury as he easily tied Willie.

In other words the Yankees don’t feel obligated to pay the bonus due to Ale Rodriguez being suspended 162 games for drug violations last year. According to reports the deal drawn up was an addendum to the 10 year $275 million contract after opting out of his previous contact in 2007. The contract stipulates five payments of $6 million for reaching the following home run milestones: 660 (Willie Mays’ total), 714 (Babe Ruth), 755 (Hank Aaron), 762 (Barry Bonds) and 763, which would be to break Barry Bonds’ record.

Alex Rodriguez reached the first milestone on Friday in a pinch hit home run that ultimately won the game for the Yanks 3-2 over the Red Sox at Fenway. Sources tell ESPNNewYork.com that the numbers are explicitly spelled out in the contract. The Yankees contend that the bonuses are contingent on the club’s ability to market the accomplishment. The Yanks have deemed that impossible with Rodriguez’s admissions and punishment for illegal PED usage.

The statements made by Cashman are the shared sentiments of the Yankees as they view the contact as being violated by Rodriguez. “We’re going to honor our responsibilities of the contract,” Cashman said. “(But) how it’s been reported . . . and what the contract actually says are two different things. It’s not ‘you do this, you get that.’ It’s completely different. It’s not all of a sudden; we’re choosing not to do something. If we choose to pursue something we’ll choose to pursue it. If we choose not to, it’s our right not to. In both cases, we’re honoring the contract.”

Rodriguez has refused to address the issue publicly, staying focused with the task at hand, which to me shows growth as a person.