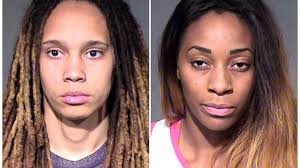 In a shocking verdict to sportsbook software companies, the WNBA handed two 7 game suspension to Brittney Griner and Glory Johnson for their domestic violence arrests in April.

WNBA president, Laurel Richie said it was unacceptable for representatives of the organization to conduct themselves in such a way.

“Brittney and Glory’s conduct is detrimental to the best interests of the WNBA and violates applicable law,” Richie said in a statement. “We also understand that people make mistakes, and that education and training are as important as imposing discipline.”

Griner has apologized for her conduct.

“I have already learned a tremendous amount from this experience and am committed to improving myself and my marriage going forward,” Griner said in a statement. “I want to thank everyone for their support over these last few weeks. I realize I let down a lot of people who have been champions for me and I will support my teammates and our organization every day until I am back on the court. I am thankful for the opportunity to make positive changes and become a role model for others to do the same. ”

Sportsbook software favorite Giner currently plays for the Phoenix Mercury, while her partner, Johnson, plays for the Tulsa Shock. The suspension will in fact take up one fifth of the normal 35 game schedule,

The All Stars, and recent newlyweds, must both undergo counseling, separately.

“It is our strong belief that violence has absolutely no place in society, in sports or in this league,” Richie said. “As president, it is my responsibility to protect the league and uphold its values.”

Professional and College athletics programs have started to discipline players more harshly as of late, especially after the violent outburst by Baltimore Ravens’ running back Ray Rice against his now wife Janay. Also with the Minnesota Vikings’ running back Adrian Peterson and his no contest plea in regards to an assault on his son, in which he forfeited the entire 2014 season.

This is the longest suspension handed out by the WNBA. The second longest was for a 6 game suspension for Kara Braxton for a second DUI received.