Will Muschamp to quit as Florida’s coach 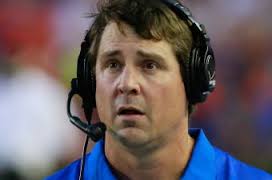 Will Muschamp – who’s very famous with many online bookmakers – will be Florida’s coach for two more games before he parts ways with the Gators.

On Sunday, Florida made the announcement that Muschamp will only be coaching the Gators’ last two meetings of the regular season, and then he will pull out of his role as the team’s coach.

“Upon evaluation of our football program, we are not where the program needs to be and should be. I’ve always said that our goal at the University of Florida is to compete for championships on a regular basis,” said Jeremy Foley, the Gators’ athletic director.

“Coach Muschamp was dedicated to developing young men both on and off the field. Our student-athletes showed tremendous growth socially and academically under his leadership. His players were involved in campus activities, engaged with the local community and represented the University of Florida with pride.

“I will be forever grateful to Will and his staff for their unwavering commitment to the University of Florida and the mission of our athletic program. He will be missed by everyone in our athletic department – from the people that worked in his office to the people that painted the fields. Will knew everyone and they knew him and everyone in the building loved working with him. Will is as fine a man as you will ever meet, and I will always cherish our relationship with him and his family.”

Under Muschamp, the Gators suffered a 23-20 loss on Saturday to the South Carolina Gamecocks during overtime, falling to 5-4 in the season, and being removed from contention in the SEC East. The team’s loss was the coach’s sixth in the last eight meetings played at home.

Even though the coach was able to take Florida straight to the Sugar Bowl after a regular season in 2012 of 11-1, his overall record was 27-20, but in the SEC it was just 17-15, and in the four seasons as a coach he only had a record of one winning conference.

His offenses, which online bookmakers know are pretty conservative, were not very popular at all with fans of the Gators, who are used to Urban Meyer and Steve Spurrier’s high-scoring attacks.

Muschamp, who was a DC for the Auburn Tigers and Texas Longhorns, was hired in December 2010 by Jeremy Foley – Gators athletic director –after Urban Meyer’s resignation due to health reasons.