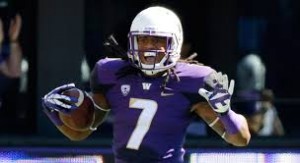 The career that Washington LB Shaq Thompson has in college football is coming to an end, and the player is getting ready to join the professional ranks. Many fans and bookmaker software services believe that this is something that should bring plenty of excitement to the NFL, considering his talent on the field.

The junior, who’s very well known for his versatility on the field, and who this year was also playing as an RB for the Huskies,

The junior, who’s very well known for his versatility on the field, and who this year was also playing as an RB for the Huskies, will give up his last eligible year and join the draft of the NFL, as announced on Monday by the player.

This year, the native from Sacramento, California, impressed fans all over the country when he finished with 81 tackles and four defensive TD’s. When it comes to offense, the player did a very good job, as he had a third placed ranking on the team, and ended up recording 61 carries made on 456 yards, and in each one of his two starts the player was able to rush for over 100 yards.

“After careful prayer and consideration and speaking with my family and Coach [Chris] Petersen at great lengths, I have decided to declare for the 2015 NFL draft,” said Thompson. “This was not an easy decision for me, I love the University of Washington, and everything the U-Dub community has done for me these past three years.”

The player is seen as a probable pick in the first round, and fans all over the country are very eager to see where he could end up playing.

“Shaq Thompson has been a wonderful representative of the University of Washington and the Husky football team, and he has our full support as he takes this important step,” said Petersen.

“I look forward to what’s to come for him and to watching him embark on what will be a long, successful NFL career.”

Thompson also clinched the Paul Hornung Award, which is given to the player with the most versatility in the nation, and now many fans are thinking about all that the player can do once he joins in the ranks of the NFL.

The LB’s fans have seen all that he was already able to accomplish in the sport, and they don’t doubt his talents for a second. Bookmaker software services will continue to monitor developments on the player, and can’t wait to see what his next move will be.