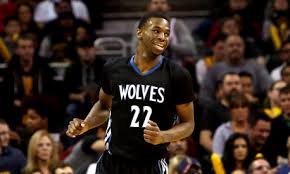 Andrew Wiggins, the Minnesota Timberwolves young superstar was named by the NBA as the Rookie of the Year. The NBA made the announcement on Thursday. Andrew Wiggins came to the Timberwolves in a trade that sent Kevin Love to the Cleveland Cavaliers. Andrew Wiggins averaged 16.9 points and 4.6 rebounds while playing all 82 games in his first season.

Price per head services and bookmakers solutions had Wiggins at +400 to win the ROY. Those are pretty good odds as Jabari Parker was the favorite at +250 and Nerlens Noel at +400 the same a Wiggins.

Andrew Wiggins was drafted number 1 overall by the Cleveland Cavaliers last summer and was a heavily touted prospect since his teenage years growing up in Toronto. He lived up to the hype in his first year in the NBA. Wiggins emerged as the new centerpiece of the Minnesota Timberwolves franchise, a franchise that has not made the playoffs in the last 11 years. The budding backcourt of Wiggins and fellow rookie and Dunk Champion Zach LaVine.

Those two are going to inject firepower into a franchise desperately needing of a spark. They also have Ricky Rubio under contract a slick passing Spanish point guard. Rubio has been injured the past couple of years and with the new pieces the Timberwolves might make Rubio available for trade next season.

The Minnesota Timberwolves hold the best odds to again come away with the top pick, even though it will be under a different scenario. The Timberwolves have the opportunity to revamp their franchise with star talent, but they also have to help these young players develop or watch them fall to the wayside. something that I’m not sure the Timberwolves can do. Develop a young player with potential into a superstar.

Mirotic was a complete surprise coming out of nowhere to have a very solid rookie season. He got extra game time with all the injuries the Bulls endured during the season. Noel red shirted his first season in the NBA. He came out ready to contribute to a Philadelphia team with very little experienced players. In the same mold of Blake Griffin after sitting out his first year, they both were among the best rookie in their first full paying season.