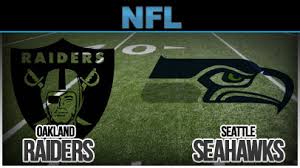 Well, we all know that the Raiders won’t be the favorites at all on Sunday when they pay a visit to the Seahawks. In fact, they’ll be the underdogs – and the big one at that – as they continue to be the NFL’s last team that wasn’t able to clinch a single win after the Browns beat them 23-13, and who Live betting fans know are proving to be a very big disappointment in the league.

The betting line opened up with the Seahawks being the favorites by 15.5 points, and 42.5 was the total.

The Raiders are 8-3 ATS against the Seahawks in the last 11 times that both teams faced each other. They didn’t play since 2010, when Seattle were demolished by Oakland 33-3 as the favorites at home by two points, and out of those covers, seven ended in victories.

However, we can all see that this spread is pretty big, and the Raiders went 9-3 ATS in their last 12 games as the underdogs by two digits.

Oakland covered their last AFC West meeting that they had with San Diego in a loss of 31-28 as the underdogs by 7.5 points, and it’s pretty certain that they’ll try to do their best when they take on the Seahawks, who are in defense of their status of Super Bowl Champions.

Currently, the Seahawks’ defense is struggling somewhat, but this may not be a big issue when they take on Oakland, as they still have one of the NFL’s bests defenses, and last week that was put on display when they beat the Panthers 13-9 on the road.

It’s very likely that the Raiders will have a lot of trouble in their efforts to score when visiting the Seahawks, and Oakland were only able to have a 12-point average in each game played this year away from home. The team had a14-point high in their season’s opening game.

Even though they were only able to have a total of 13 points when they faced the Panthers, whose defense is nothing to take lightly, Seattle can definitely score – and score well.

Oakland only allowed a 29-point average for the last four teams that they played against, so many Live betting fans believe that facing the Raiders’ defense could be what is needed by the Seahawks to see their offense bounce back without the services of Percy Harvin, who moved over to the Jets.

There are no doubts in the minds of the experts that Seattle should be able to give Oakland a proper thrashing without any major hassles.